Avli by Tasha Brings Yet More Greek to Dubai

After the Peruvian wave of 2017, it’s safe to say Dubai has fallen in love with a new cuisine. That cuisine, ladies and gentlemen, is Greek. We already have Elia, Shimmers and Mythos, but now we can add to that Gaia, Ena, Ammos, Opa and Avli (aaaaand there’s more to come, apparently). It’s getting a little crowded. Avli is the first Greek restaurant we’ve taken for a spin in Dubai (save for Shimmers, which is so basic we just don’t want to even count that one) so we’re a little unsure as what to expect. We spent a good few weeks in Greece last year and from what we tasted, the magic of Greek cuisine is in the freshness of the produce and the setting. It’s rustic. How will this translate to Dubai’s high flying, high priced, high produce miles environment? 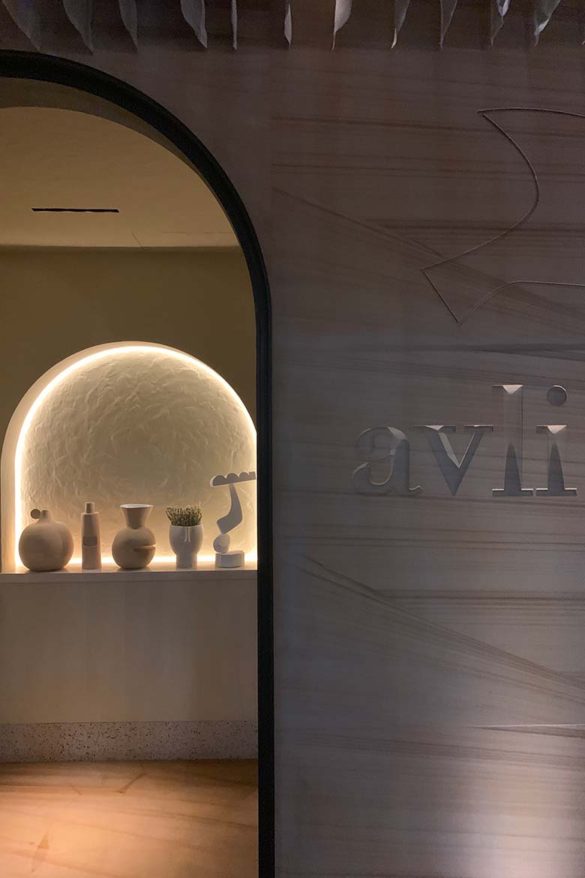 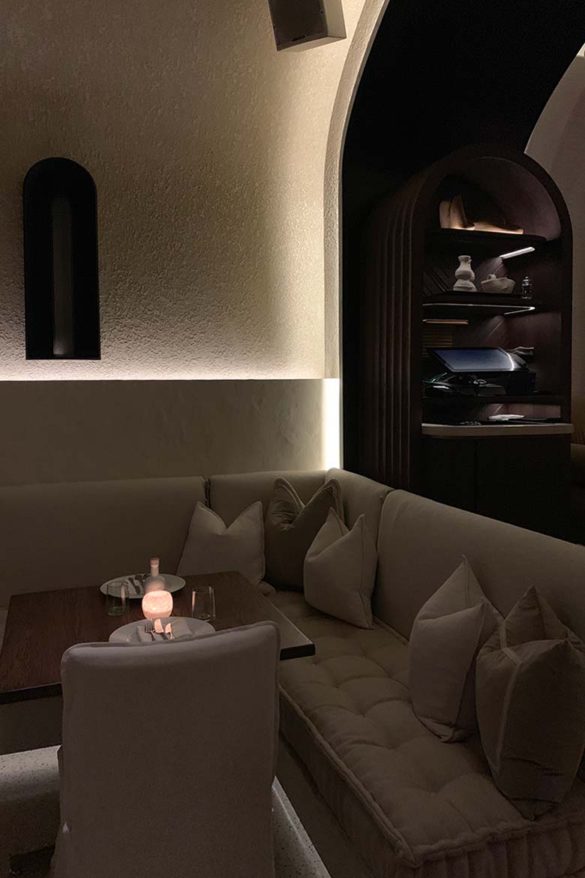 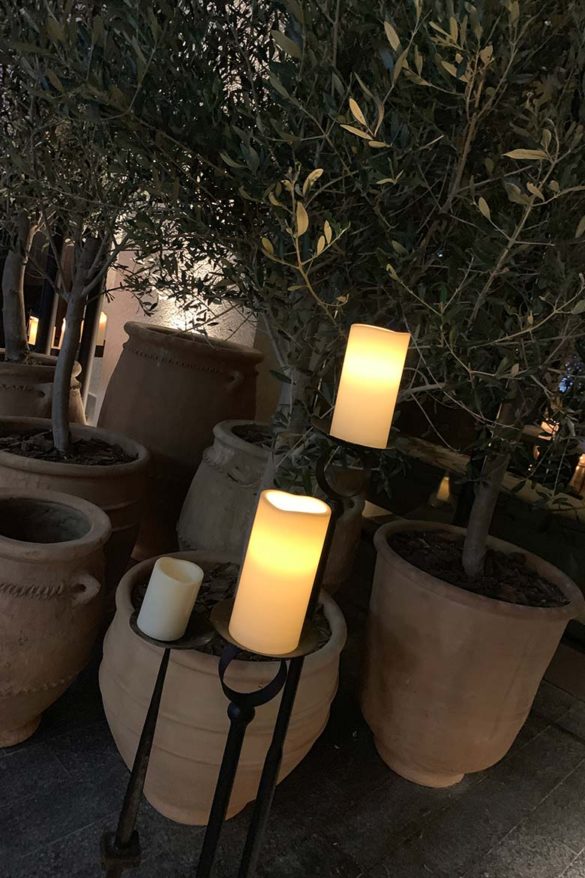 Firstly, we have to say, Avli has balls. It’s set up camp right next door (and we mean right next door) to two Dubai faves – Le Petit Maison and Michael Mina’s Mina Brasserie, which we love. But stepping inside Avli, we can say this is a fit out that is truly gorgeous. It takes us right back to the whitewashed walls of Santorini, without being as cliché ‘Greek’ as the plate-smashing Opa. We start with a cocktail (or two, or three…) and we’ll hand it to Avli here again for having balls…their drinks are unique, and we’re living for some mixology diversity in what is, realistically, a bland market when it comes to cocktails. 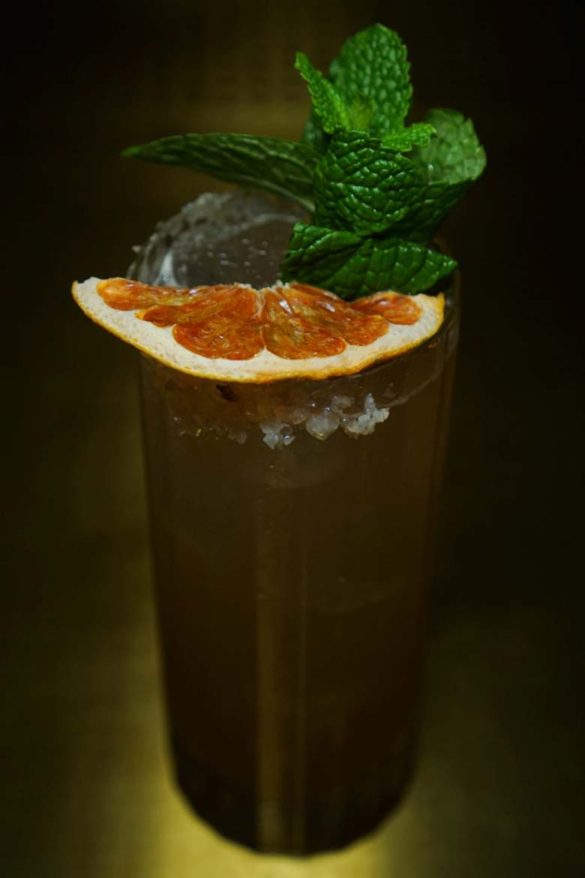 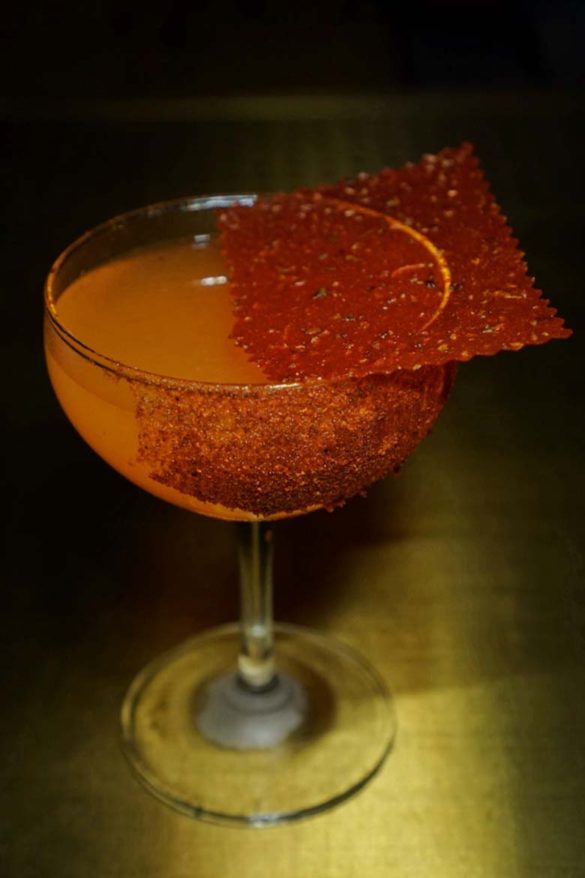 We love the Amigos de Grecia (cilatro tequila, ginger, lime, bitters, grapefruit soda – 78dhs), while the Florina Feast (tequila, Cointreau, agave syrup, lime, pickled peppers – 84dhs) is definitely different in a good way, but we just want a little more heat, sweetness, acidity…maybe just chuck a chili and some coriander in there and we’d be happy campers (we’ve found the perfect chili cocktail, by the way, it’s at Katsuya by Starck). Their Spartan Cave (ouzo plomari, lemon, greek mountain tea bitters, ginger beer – 78dhs) was certainly unique, but the combo of the aniseed from the ouzo paired with ginger didn’t really work for us…the best way we could describe it is like eating a black jelly bean and crystallized ginger at once. Unusual. 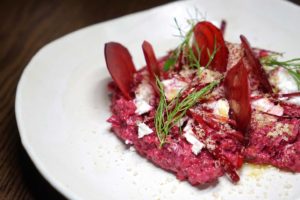 It’s time for food and our first taste is Avli’s breads, served with butter and a sundried tomato paste so good we don’t even need to touch the (no doubt, excellent) Greek olive oil on the table. We enjoyed the textures of their Beetroot dip (and especially the sesame crackers that accompanied it) and particularly loved their Greek salad. 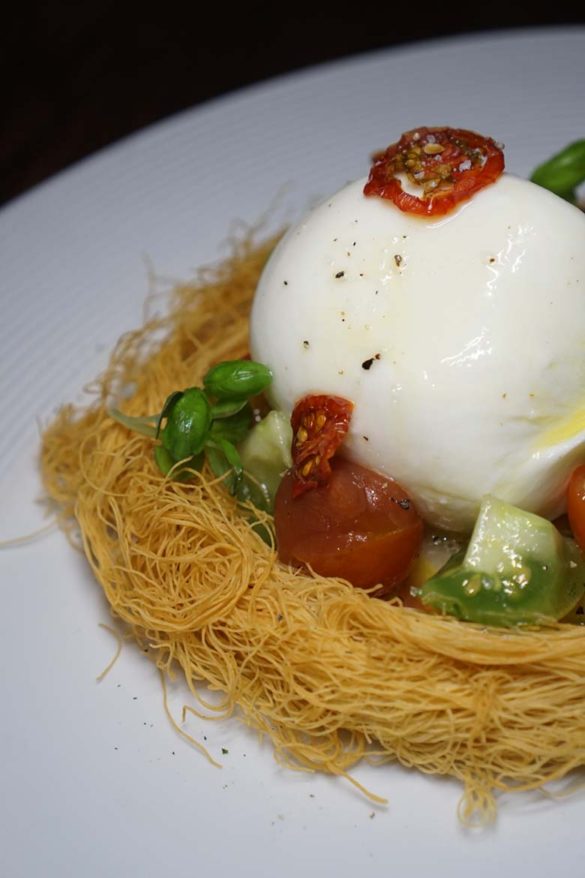 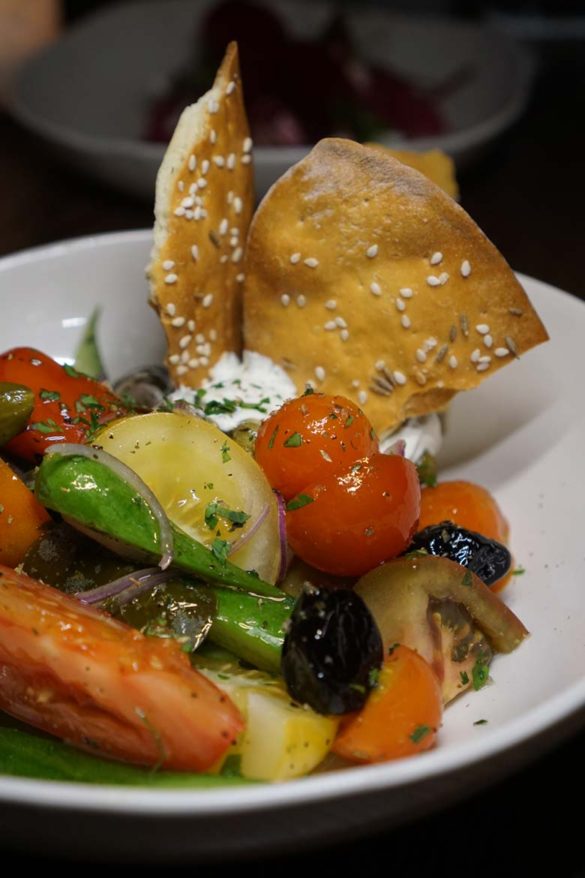 It’s not your usual Greek salad, rather it’s large slices of the usual suspects and smooth, creamy feta with herbs. Pretty darn good. Their burrata, on the other hand, we didn’t enjoy so much (and we love burrata). It featured tomatoes, some of which were quite sour and acidic, surrounded by kunafe-like pastry strands. On the whole, it was underseasoned and texturally just didn’t work. Props for trying something new, though. 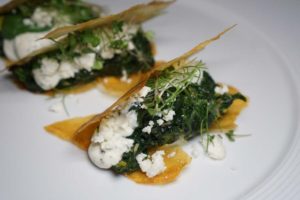 Avli’s take on the quintessential Greek spanikopita is admirable – it’s modern, for sure, but in a strange juxtaposition to the previous dish, it’s over seasoned and just far too salty for even our salt-loving palate. The Ladenia (apologies, we didn’t get a photo as the rest of the table dived in in a rather speedy fashion), for us, is just nice roasted tomatoes on pizza bread and doesn’t really satisfy what we’re looking for when we dine out. PassMeTheDimSum loved it though, so if comfort food and carbs are your thing, order it! 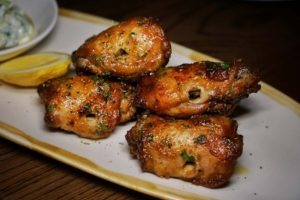 Mains are up next and it’s a fairly simple affair compared to our starters. This is something that we often struggle with when it comes to Levant and Arabic cuisine – how do you elevate grilled meat and potatoes? We think no one has really managed to do this well, save for perhaps the amazing Ninive at Emirates Towers. We try Avli’s Souvla, and yes, it’s juicy and tasty, but paired with the potato fries (served with potato dip, is that weird? Dipping potatoes into potato dip??) it feels like (please forgive us) an elevated version of Kentucky Fried Chicken. (I mean, New Zealand KFC, the good stuff). It’s not a bad thing, honestly, we mean no hate here – just the flavours are so reminiscent of the Colonel’s 11 secret herbs and spices that it’s hard not to make the comparison. That’s all. It’s undoubtedly better, of course, but we yearn for battered, deep fried chicken. We do. We’re sorry. That’s just the type of chicken we personally lust after…any other chicken just won’t pique our interest. We also try Avli’s lamb chops, which we think might be Australian (we didn’t get a definitive answer when we asked) and these were fine, if not amazing. We prefer more of a high heat char on our lamb chops, a bit of crispiness on the fat. They weren’t bad, by any stretch, but just not something we’d reorder. 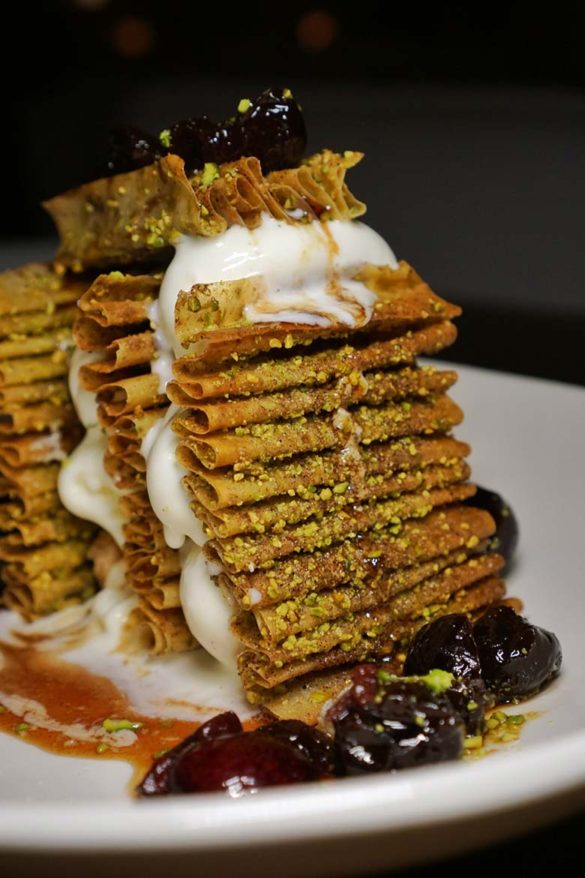 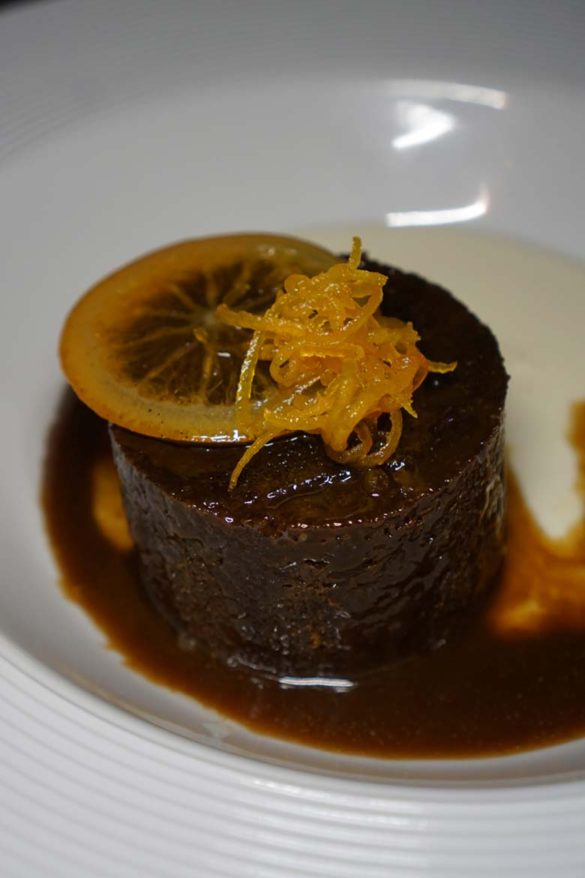 So that brings us to the dessert portion of the meal, and due to our pistachio allergy, we were only able to try one, Amira’s sticky orange cake. We have to say, the sweetness and crispy-edged texture of this dessert was on point. Delectable. We’d just have loved it so much more if they hadn’t involved orange in the equation. Either you love orange, or you don’t. We’re firmly in the latter category, but if you even so much as like orange a little, this dessert will certainly please.

Overall, did this meal have us shook? No, not particularly. But then, we want to see Greek food that is elevated and reinterpreted, as opposed to (admittedly quite good) versions of the classics. As we’ve already mentioned, the fit out is on point and the cocktails are creative (even if they don’t always quiiiite work), so props for that. The music is intriguingly eclectic, at one point playing a foreign language version of ‘This is how you remind me’ by Nickelback, which had our table in stitches once we realised. It was certainly popular on the night we visited, however, and in no means would be a bad choice for a night out if you’re a lover of traditional Greek cuisine. We’re just yearning for something a little…different.

Are you a fan of traditional Greek cuisine? Do you think it will survive in the brutal Dubai restaurant scene?

Does The London Project Get a Pass or Fail?

Does Melbourne’s Dinner by Heston live up to...