Housed in the world’s tallest building, the Armani Hotel and it’s chic dining establishments are the epitome of Dubai indulgence. Armani/Deli is the first of the four dining concepts I’ve experienced – the more casual, traditional Italian offering and the only one of the restaurants open for lunch. Sure, it goes without saying that I love Italian fare – but there’s something else that brings me back to Armani/Deli when guests are in town – that view.

You might not be aware that Armani/Deli has the best view in town in my opinion when it comes to showing off the world’s largest dancing fountain – traditionally it’s viewed from the other side of the pond, but I like Deli’s perspective. It’s not the easiest location to get to, and certainly not one you’ll stumble upon, but it’s worth seeking out for it’s unique perspective.

It’s a strong design aesthetic – the interior is very ‘Armani’ with it’s monochromatic palette and play on proportions and textures, and I like that. The symphony of shiny surfaces and stark contrasts can be a little cold at times though, which I think could be combatted by some warmer lighting. Every time I’m there I want to turn on some lights, as it doesn’t feel ‘dimly lit’ (which can be fantastic for ambience), but more ‘someone hasn’t turned the lights on for the day’, especially with the contrastingly bright outside light peeking through the windows. This might be a little different during the evening, but I’d love to see a change in the lighting for the daytime. Ambiance is something that is sitting in the ‘needs improvement’ box for Deli, from the music to lighting to physical spacing.

My preference at Armani is definitely dining al fresco. The balcony is where it’s at for ultimate fountain views, but during the summer months it’s unavailable – that being said though, you can pop out when the show is on if you can handle the heat!

One might automatically assume that anything labelled ‘Armani’ is going to be extortionately expensive, however in my books, Deli really isn’t. Let’s face it, Dubai restaurants in general are among the highest priced in the world, and this one commands amazing views…yet still offers a fantastic lunch set option, the Pronto menu. On this menu you can order two courses for 130dhs or three for 160dhs…a fantastic option for those who prefer to know what they’re up for. The ‘Pronto’ menu options are naturally more restricted than the a la carte menu and dishes configured to enable the price point, but not in a way that should cause too much consternation.

Dining at Deli gets off to a good start, as something Armani/Deli does very well is their bread – it even comes with antipasto. A fab silver Armani-emblazoned bread tray carries some delicious carb creations, my favourite of which is the olive bread – absolutely divine with some of the house butter (imported from France) or top notch olive oil. The chunks of parmesan are indulgent, the sundried tomato pesto (it’s nut-free too!) delish, and I even like their olives (that’s rare – after a massive olive phase in my early twenties let’s just say they are no longer on the usual grocery list). They also have their own water – I love the sparkling variety, it’s fantastic – but I’m really not a fan of the still version. It has that Evian taste to me, and I’m really not a fan of Evian…especially warm Evian. First world problems huh? Crikey, what have I become.

For this visit, we chose to dine from the a la carte menu as I’ve previously dined on the Pronto menu. 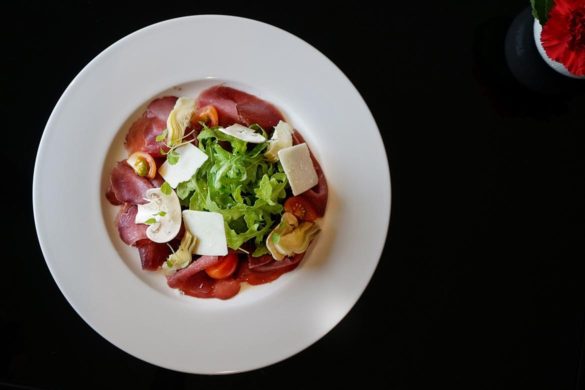 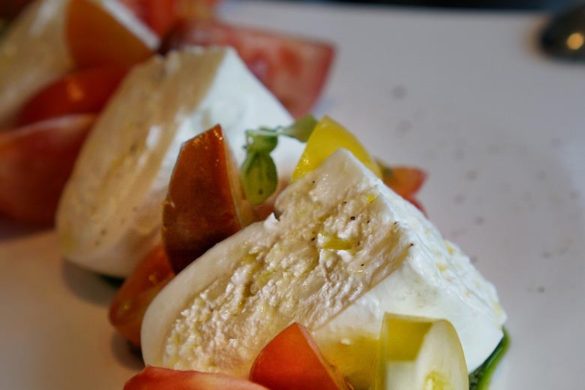 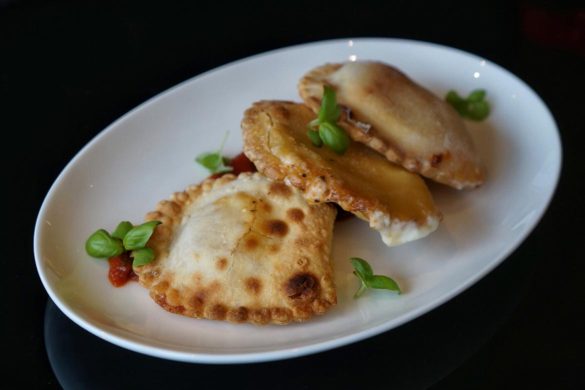 The burrata and the bresaola are both lovely alone, but a match made in heaven when combined. I’d definitely recommend ordering these two dishes together, as the burrata gives the bresaola salad the moisture and creaminess it needs. The bresaola itself is impressively tender and surprisingly not dry, but the salad on the whole ends up being on the dryer side of the spectrum – so when combined with the burrata dish this issue is alleviated. Add some of the olive oil and balsamic sitting on the table and it’s all good.

The fried ravioli are an indulgent stand out – fantastic. These are part of the ‘Campania Summer Set Menu’, but I think they should make the cut for the a la carte – add them to the menu I say. The pasta pastry is crispy, the interior cheesy and gooey. With a little marinara sauce on the plate, it’s like a mini calzone. Yum. 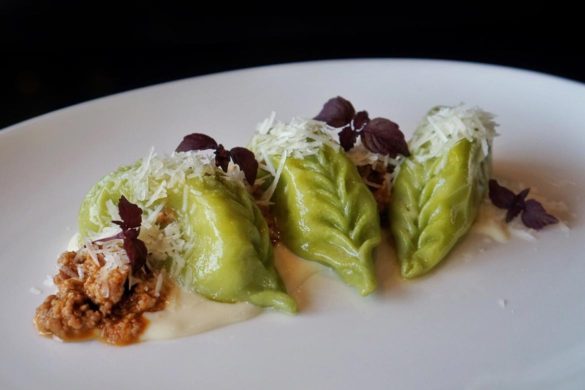 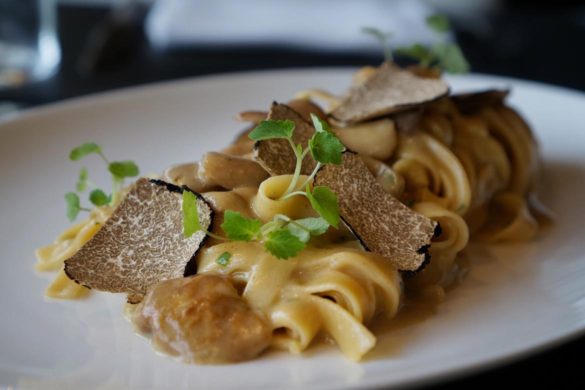 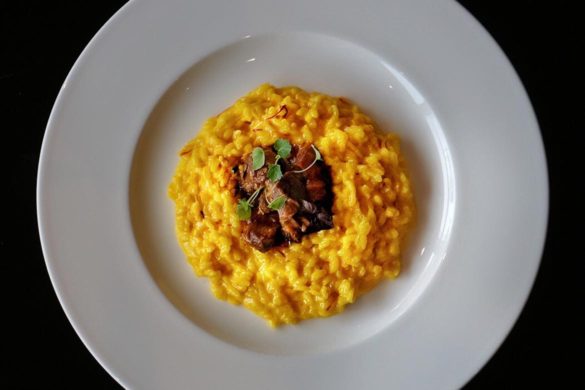 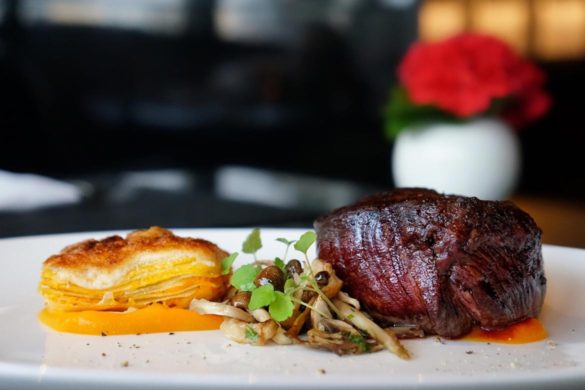 The team at Deli get a 10/10 in the passion department, and you can tell the food they cook really comes from the heart – the Sardinian ravioli being a favourite of the chef who hails from the island of its orgin. The pasta parcels are exquisitely crafted with a unique stitch-style fold that looks rather beautiful on the plate. I like that it’s different in style to your usual ravioli, being filled with a potato and mint mixture, but for me it was a tad on the heavy side and quite salty with the aged pecorino. I love salt, boy do I love salt, but I did find that across the board the dishes at Deli were on the saltier side, often attributable to a powerful cheese element.

Though only a small section on the menu, the protein is handled well at Deli. The grilled beef tenderloin was cooked to medium-rare perfection with a fantastic crust to it, something not often achieved. The mushrooms added a refreshing, almost Japanese element, but the pumpkin cake missed the mark on texture and taste. The pumpkin cake was actually a reimagined dauphinoise-style preparation containing layers of pumpkin and potato, but the ridges along the potato slices from the way it had been prepared combined with the mushiness of the pumpkin didn’t combine well when it came to mouthfeel. Change up this element and the dish would be a knock out.

We also sampled another regional dish, Risotto Alla Milanese. The bright yellow risotto of Milan gets it’s colour from saffron – which also gives it a distinct flavour. I think the flavour might be an acquired taste, but if you love this classic I’m sure you’d enjoy this rendition – I loved the osso bucco veal placed in the centre though. The amazingly tender meat just melted in your mouth – delish.

The porcini & truffle fettuccine was a crowd pleaser in looks and taste – a favourite of the day. This one’s for creamy pasta dish lovers. How can you resist truffle on a menu at at an Italian restaurant? I certainly can’t!

The dessert course is a nice casual end to the meal – it’s not ordered off the menu, rather you head to the pastry counter and pick out your choice of sweet treat. We chose… 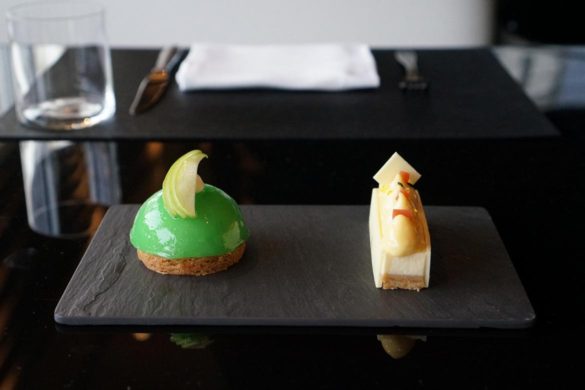 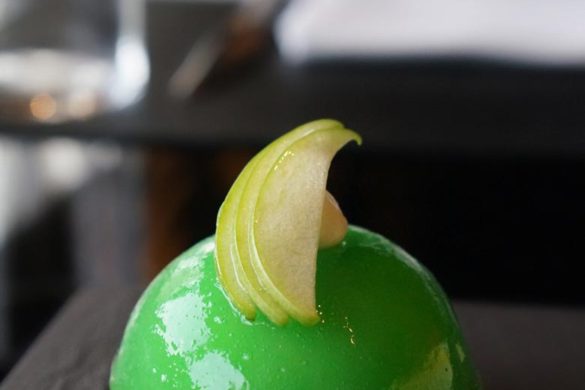 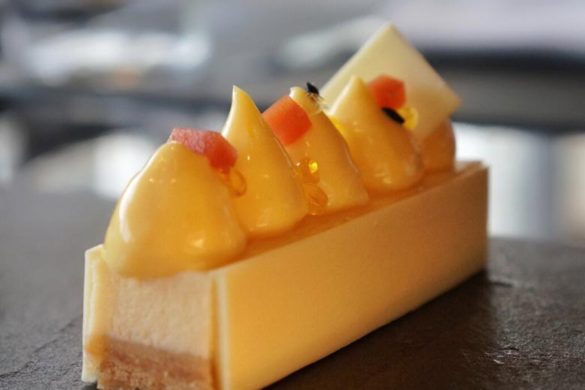 The tartin is certainly an attention grabber with it’s bright green jelly, hiding a cooked apple interior. Nice for sure, but the cheesecake was the winner on the day. The texture was spot on and flavours delicious – the white chocolate sides the perfect foil for the pops of passionfruit. I’d definitely order this one again. Don’t miss out on the coffee either, it’s spectacular!

If the food, style, Italian hospitality and view aren’t enough reasons to check out Deli, then I have something for you that should push it over the edge.

Did you know that just by dining at Armani, you can access At.mosphere lounge at the top of the Burj Khalifa after your dinner at no cost, with no minimum spend?

Though you can only reserve non-windowside tables (the view is still fab don’t worry, and don’t forget the view from the toilets), this makes dining at Armani fantastic value for those who want to ascend the world’s tallest tower to get a bird’s eye view of the spectacular Dubai landscape. When you offset the cost of a Burj Khalifa ticket, suddenly the equation tips in Armani’s favour rather spectacularly. Who knew Armani could be stylish and a steal? This makes it a perfect destination when friends and family are in town.

Armani/Deli is traditional Italian food made with love, and a great venue for seafood lovers (the menu is extremely seafood heavy – I’d really like to see the non-seafood side fleshed out more), but don’t come expecting haute cuisine here or inventive combinations. If that’s what you’re looking for then check out their higher end option, Armani/Ristaurante – I haven’t dined there yet so can’t give a personal recommendation, but as soon as I do I’ll be sure to let you know.

Where do you take your guests when they visit Dubai? Let me know in the comments below.

Nikki Beach Hotel Brings a Slice of the...

Looking For Dubai’s Best Restaurants? These Are Our...