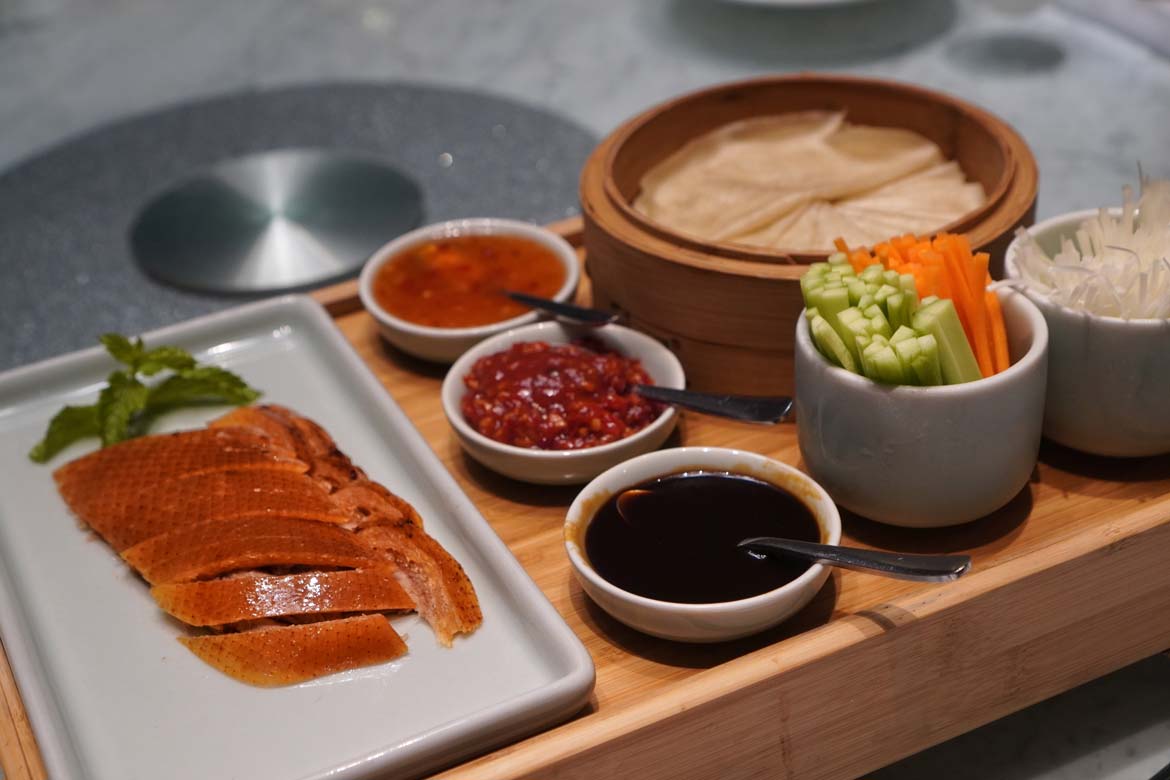 Craving the Cantonese delicacy? We’ve dined our way around Dubai’s duck offerings to give you the low down on the birds you don’t want to miss…

If you’re looking for the quintessential old-school Chinese dining experience (but with a little DIFC flair) then Royal China is for you. It’s not quite as swanky as The Pointe’s Chuan, and some of the seats could use re-upholstering…but then again, the price points aren’t as sky high either (in fact, Royal China is amazing value – this is the most duck for your dizzles on the list). It reminds us of that family favourite Chinese restaurant that’s been around for 20 years that you go to for dim sum once a month…but with high ceilings, fancy chandeliers and wine glasses that are big enough to fit more than two tablespoons of liquid.

If you want the proper, authentic, full on Peking duck experience then Chuan is the place to head. Chuan is the closest you’ll find in Dubai to proper Hong Kong Michelin starred Cantonese (they even have private dining rooms equipped with large round table and TV as is customary), with every dish across the board leaning much more traditional than the more modern Dubai style. You’ll need to order this very special duck one day in advance, and let us tell you – you won’t find a duck this glossy, this perfectly plump anywhere else in the emirate. The glass-like thick and crispy skin is plated in dramatic fashion, guests encouraged to dip their first piece of skin in white sugar for the ultimate how-they-do-it-in-Beijing experience. The only drawback? Chuan’s duck is served with a soy bean sauce instead of hoisin (our preference) and we did miss that classic element. Maybe next time we can BYO our own jar?

You probably know we’re not one for chain restaurants…so we hate to say it, but…we love Hakkasan (read our full review here). You really can’t go wrong with anything on their menu, but their Peking duck truly is excellent. We like their slightly fluffy pancake squares that make this more of a Peking duck flat bread than roll, just enough to make it different.

Competing with Chuan for fanciest-new-kid-on-the-Chinese-block is DIFC’s cavernous Hutong. Hutong falls into the international-chain-restaurant category alongside fellow upscale Asian neighbours Zuma and Roka (and the aforementioned Hakkasan), with branches from London to Hong Kong to Miami. Honestly, we think the menu at the Dubai outpost needs considerable work – but if it’s Peking duck we’re talking, you’ll be happy with Hutong’s offering (and the pricing is pretty competitive which is a definite plus). This is a dish that we would recommend you go to Hutong for. (Maybe we need to take Hutong for another spin?)

We Finally Venture Into French Fare at Bistro Des Arts

Our Favorite Dishes on Talabat: Volume 1