As my Uber nears the end of the long trek through the Mexico City traffic en route to Biko, my view slowly starts to change from bustling city scenes to polished, posh Polanco streets – and I get a hunch that my lunch date is going to be a relaxing respite from the madness of downtown Mexico City.

My suspicions are confirmed when the lift doors open to reveal Biko’s sophisticated and serene dining space. We’re pretty early by local standards at 1:30pm, and I like that we can enjoy a little time to ourselves before the crowd arrives. At the recommendation of the chefs (yes, plural – there are two captains helming this ship) we will be experiencing the signature tasting menu, though there are also two other menus – one focussing on ‘past’and one on ‘future’, from which you can dine a la carte. At 1100 pesos ($55 USD, $76 NZD, AED203) you’d be hard pressed to beat the value on offer here, though one needs to keep in mind the tasting menu is on the shorter side by international standards. 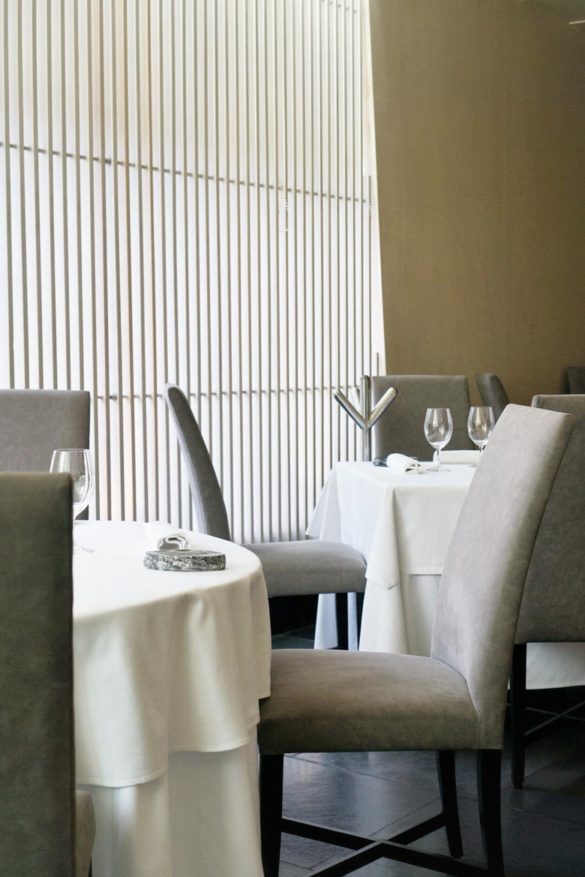 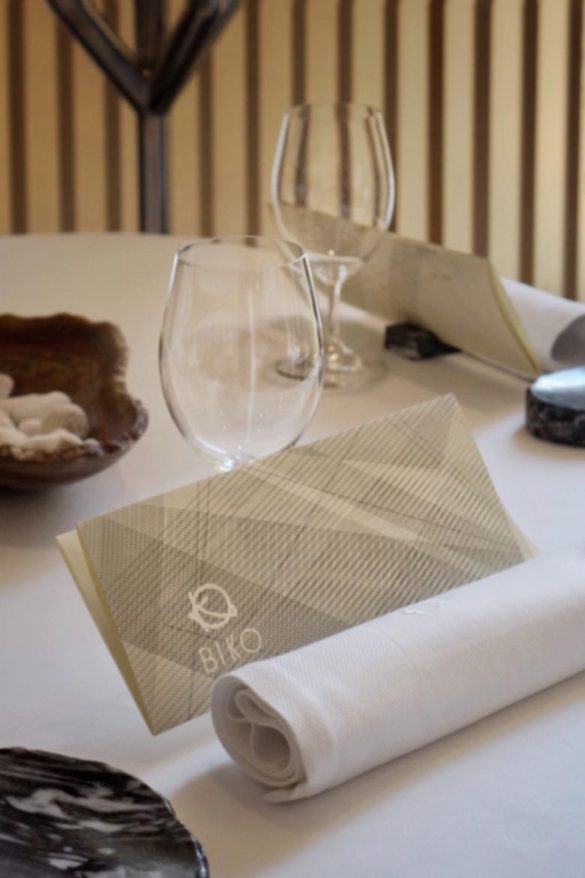 I’m rather ravenous having saved all my stomach space for Biko’s delights, so to say I was happy to see the bread selection is an understatement. Pistachio, sunflower seed and olive are among the varieties on offer accompanied by little golden pearls of butter. All light and fluffy, in contrast to the heavier breads I’m used to when dining in Europe.

It’s not just the breads that are light – it’s also a word I’d use to describe the tasting menu in general, a nice respite from some of the very lengthy and rich menus I’ve been consuming in Europe recently (hello Martin Berasategui). At a concise 7 courses, it’s perfect for a lunch date – this is a meal that won’t weigh you down and should leave enough room to enjoy some more excellent Mexican cuisine later in the day should that be on your agenda. For a dinner though, some may find it too light – somehow I think my husband would still be starving at the end of the tasting menu.

Our amuse, as is the trend these days, was spectacular. If I had a dollar for every time I said ‘just give me a bowl of that’ when it comes to the meal’s first morsel I’d be a rich woman (ok maybe not rich, but hey, it might spring for a nice bottle of wine). Threads of bright orange jicama and pops of garlic made for a very promising start to proceedings. 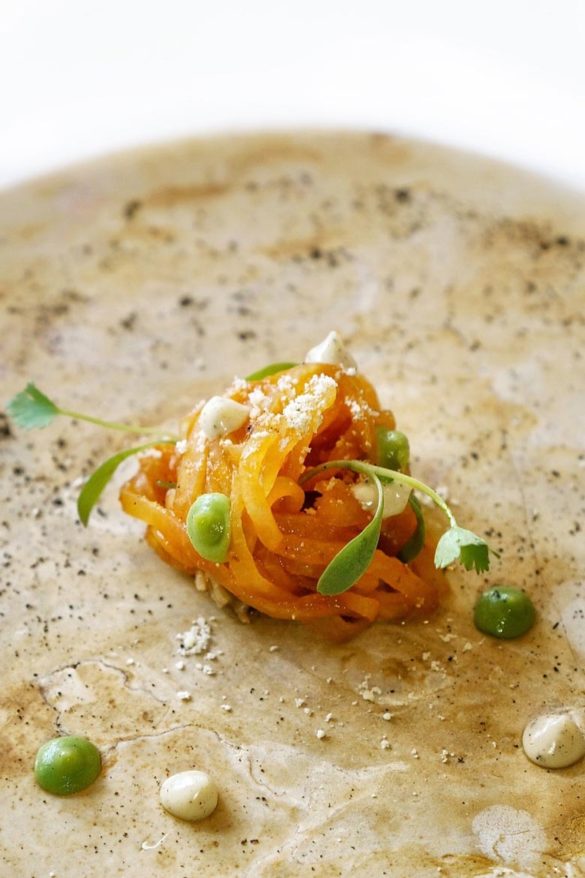 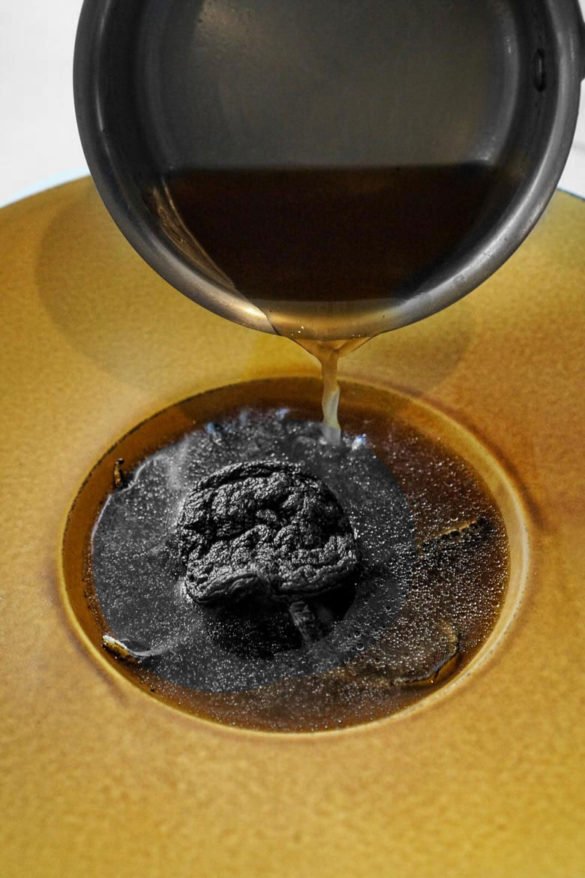 Now I know I said light, but don’t think you’re getting away with a foie-free fine dining experience here. To be honest, I feel foie is super overused in tasting menus right now, but hey, I get it. People like foie. (…Or do they?) Biko’s interpretation was a playful one, hidden under a corn husk and dusted with burnt corn husk powder. The instructions for this dish – take your bread, dip it in the super sweet corn soup and spread on the foie-corn ‘tamale’. Certainly an interesting Mexican take on the fine dining staple. Up next is a broth that nursed paper thin slices of wagyu, cooked towards the medium-well side of things, giving a roast beef taste to the meat. The broth featured algae (the green bits), beet (the red bits) and had a subtle sweetness that, paired with the dill, conjured up memories of pickles, and all combined, a hamburger. Now, I don’t want to take anything away from this finely executed dish by comparing it to fast food – on the contrary, I really loved how it echoed those taste memories in such a different application. Pretty cool, and delicious too. (Though if I have one comment, I would have liked my wagyu a little more on the rare side).

I rather love the look of our next dish – a starfish-like arrangement of corn elements nestled in a golden corn-hued bowl. A corn broth is added to make it four textures of corn, and I’m in heaven. I love corn, and hey, I’m in Mexico – come at me corn! I’ll take corn a million ways if I’m honest, and this dish really nails the beauty of the magical ingredient so revered in Mexico. The broth is gorgeously rich and satisfying, yet leaves no residue or heaviness on the palate, just pure flavour. I couldn’t help but wish someone would bring me a giant bowl of it – I really could have used it after the previous night’s Latin America’s 50 Best celebrations. My favourite dish of the day.

Another pretty plate follows the cornpocalypse, ‘Braised veal with colours and flavours’ (not the official title, just the Google translate title).  A succulent and tender piece of veal that fell apart at the touch was elegantly complemented by the colourful dots of flavours scattered around the plate. The rich flavour of the veal was reminiscent of bacon – surprising but delicious, and I enjoyed playing with the individual dots of flavours.

Pork jowl with amaranth is the dish that sadly ends our savoury sojourn, and I’m already lamenting the fact that the end is nigh. But on a positive note, the pork is tender and succulent, complemented well by the amaranth and sauce – I was told it contained cinnamon but honestly I couldn’t really detect that note. A nice dish to end the section, but I’m left wanting more savoury courses – I’m just not ready!

Dessert numero uno is a pretty plate indeed – a hoja santa infused cake sits on a bed of orange gel, topped by an assortment of colourful baubles of varying flavours – almost like petit four on a cake. Sadly it was style over substance for this course however, this dessert just didn’t hit the mark for me.

One last dessert…concealed inside an ice cold stone egg is a single quenelle of ice-cream. Not just any ice cream, this one is pipicha flavoured! I’m guessing many of you won’t have heard of pipicha before, so I’ve saved you the googling time. According to Wikipedia, pipicha has ‘a strong taste akin to fresh cilantro with overtones of lemon and anise’. I have to agree with that assessment, and being a cilantro fan this was rather tasty! Exceptionally smooth in texture also, this was some elegantly crafted ice cream.

With some faux-guava petit four and an espresso, our Biko experience is over all too soon. I’d love to see some longer menu options on offer at Biko so it’s possible to experience more of their artistry – I just didn’t feel I got to taste enough! Those with large appetites may want to supplement with additional courses from the a la carte, or create their own tasting menu. I suppose I’ll just have to come back next time for more exploration…

The Lodge Bar Gets Cosy in Commercial Bay