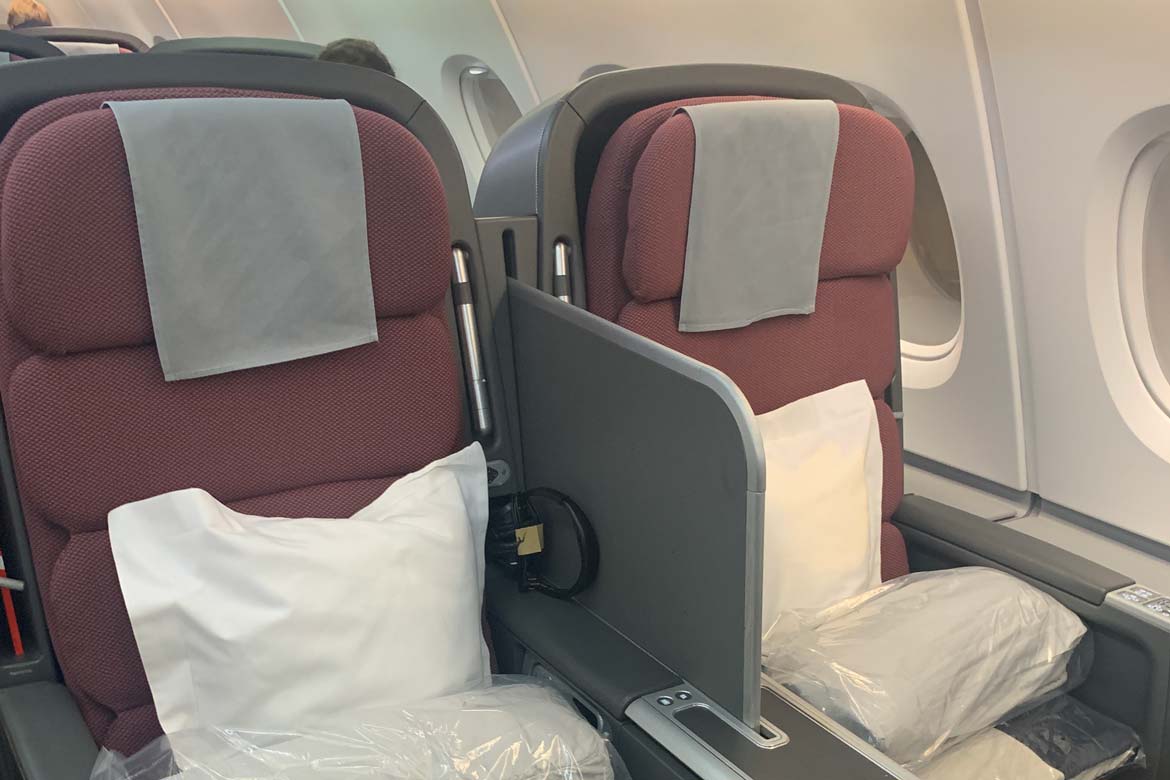 We reviewed Qantas’ A380 Busines Class, flying from Sydney to Singapore in 2019. Can they claim to compete with Middle Eastern carriers when it comes to their product? Here are our thoughts… 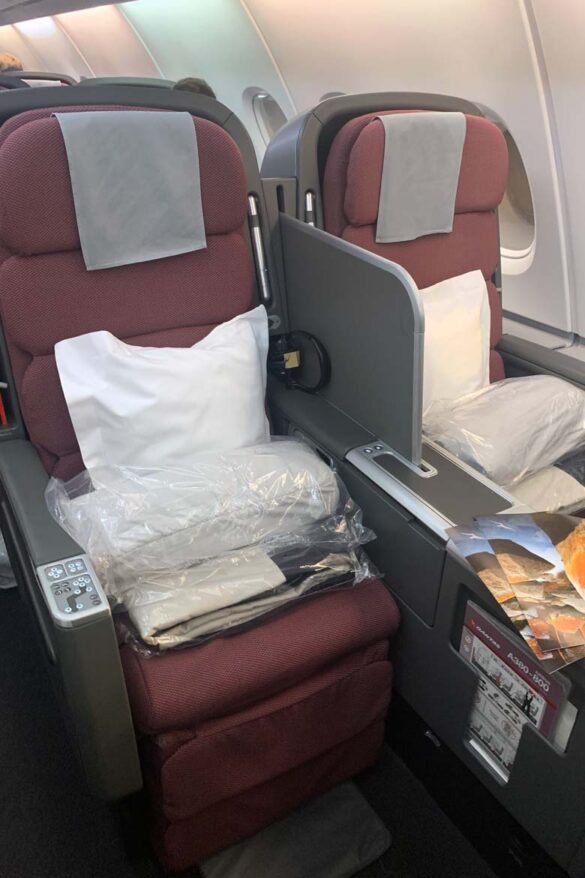 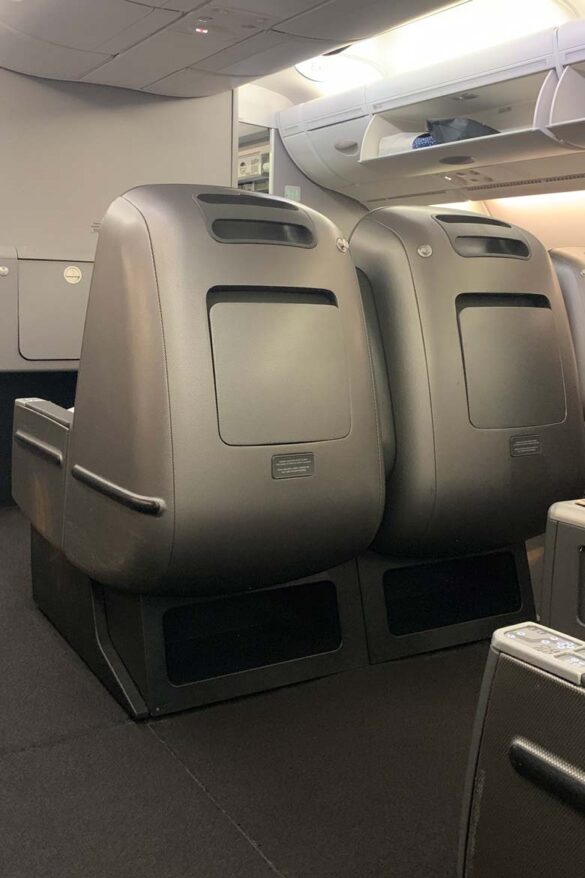 We’ll be honest, there isn’t a lot. Qantas’ A380 is set up in a 2-2-2 configuration with no single seats available. Whilst this might be great for those travelling as couples or groups, it’s definitely a downside for the solo traveller when most airlines operating the A380 offer a 1-2-1 set up. Privacy screens between seats finish at about head level and there’s only a narrow dividing console, so unless you’re well reclined into the pod-like seats, you’ll likely be able to see your next-door neighbour and what they might be working away on. The cabin is also very open in design and while this does make it light, airy and spacious, we prefer a cosy cabin with more privacy – we can see clearly across the entire plane from window to window. 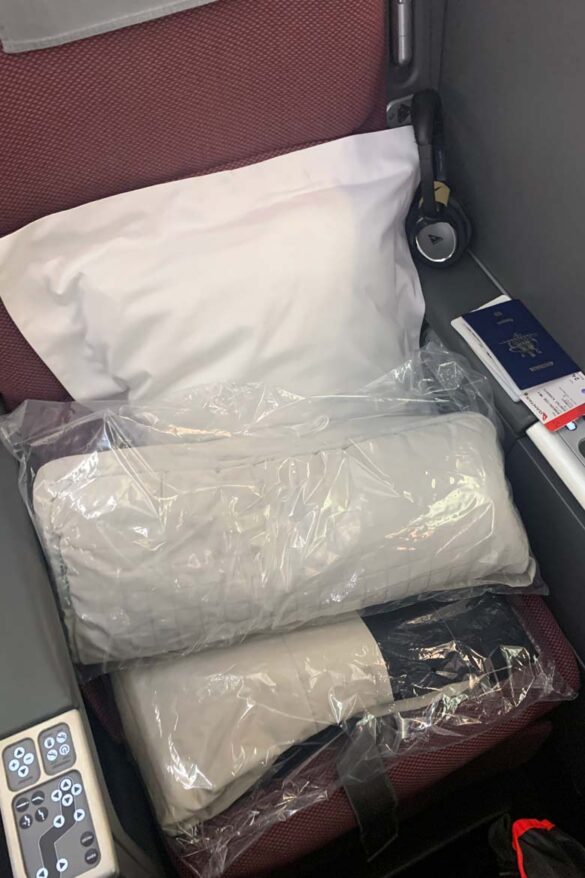 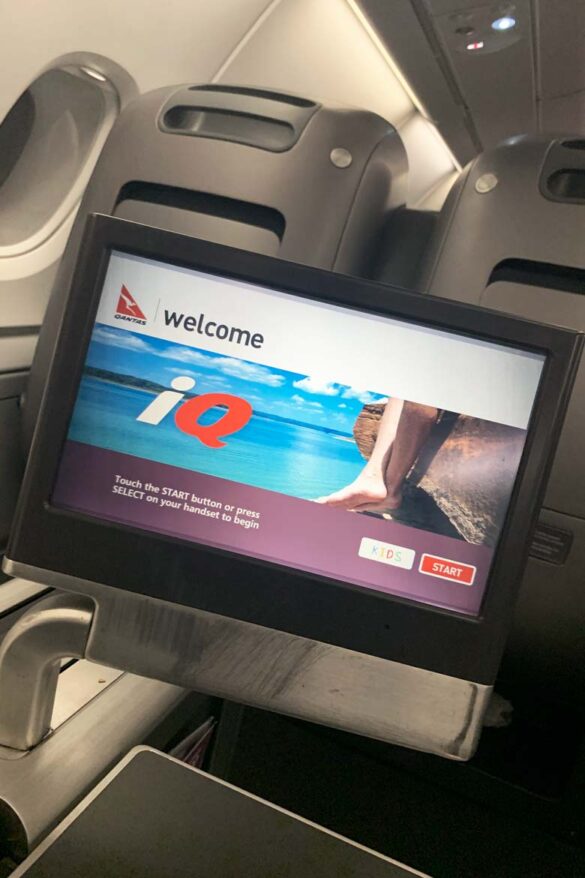 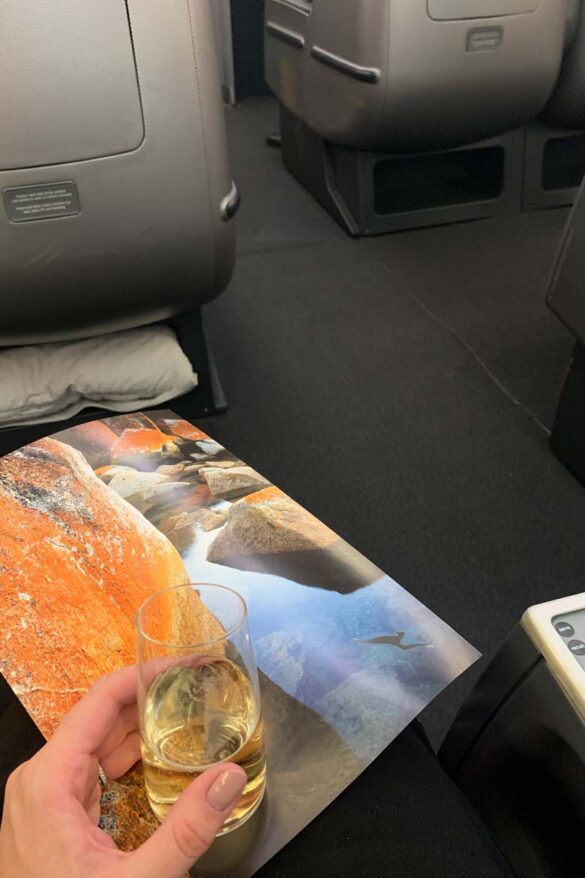 There are definitely pros and cons to Qantas’ unique pod seat design. One of the positives is the seat itself, unusually equipped with a massage function – something we don’t see often in the sky. We also love the fact that you can fit your mattress to your seat pre-takeoff (and you’ll find it on your seat when you board). Usually, the restriction on mattresses pre-takeoff is for safety concerns – they would rather you didn’t trip on a stray mattress in an emergency – so we think the hooded top of the Qantas mattress that secures it to the seat probably has something to do with it being approved for use throughout the entire flight. The seat is easily configurable, with a control panel fitted into the seat arm. Lumbar is also adjustable which is a nice touch.

The downsides? Apart from the privacy issue, Qantas’ seat design is showing it’s age when it comes to the in-flight entertainment equipment. All screens aboard the A380 are recessed into the armrest that divides each pair of seats, meaning that you are unable to watch any IFE for takeoff and landing as the screens need to be secured. It also means that the screens are on the small side, we’d equate them to the size of the screens in Emirates economy. Honestly, it’s disappointing to see such a small screen size in a business product. Another issue on the ageing Qantas A380 fleet is reliability – our neighbouring seat had faulty IFE and the massage function of the seat didn’t work either. We can’t remember a Qantas flight where there wasn’t an issue with our IFE or someone around us. Time for an upgrade, Qantas!

Three USB ports and one international power socket are provided which we commend, but their location at the front of the seat-dividing panel isn’t the most convenient.

The seat itself boasts two small compartments within arms reach for phone-sized items and pouch for reading material or small laptops. A shoe storage space, hard expandable pocket, jacket hook and a somewhat strange open-bottomed compartment are located in the back of the seat in front of you.

A pillow, blanket, mattress and headphones are waiting for you on your seat when you board. Bottled water isn’t provided until after takeoff (but on the upside, that means it is cold) and an amenity kit is provided. The pouches feature designs by local artists and contain socks, an eye mask, hand cream, lip balm, face moisturiser, dental kit and ear plugs. Pyjamas are supposedly provided on some long haul overnight flights, but not on ours. 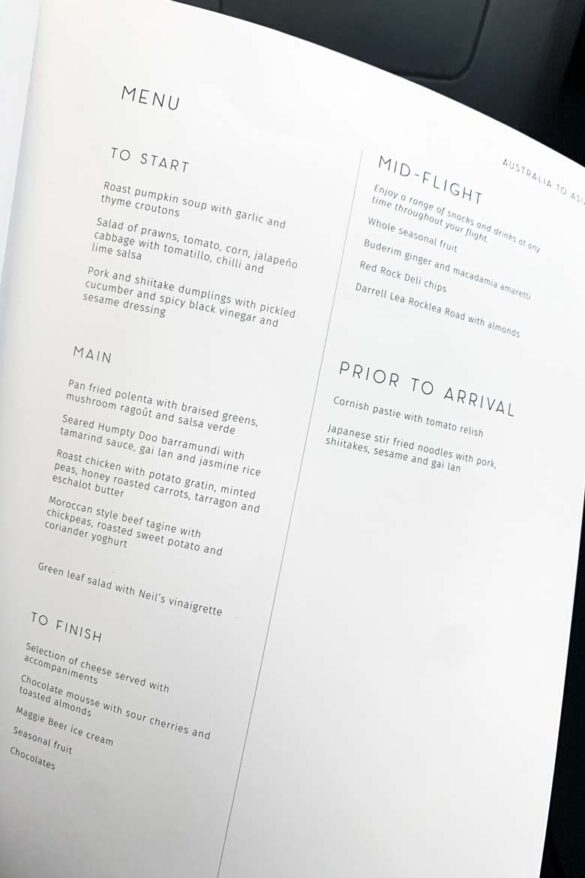 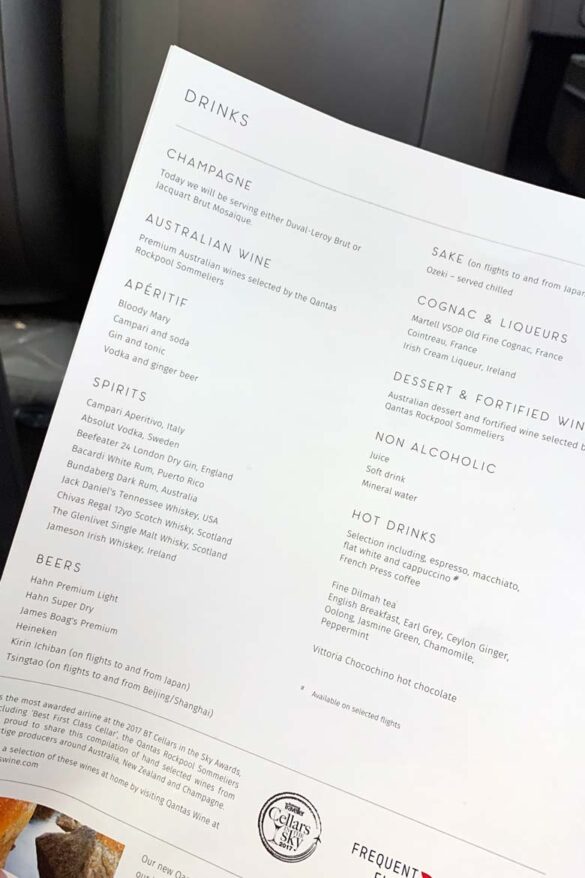 An A4-sized menu is waiting for you when you board, and on our flight, there were three choices of entree (soup, salad or Asian starter) and four choices of main (vegetarian, fish, chicken and beef) served alongside a side salad. For dessert, you have the option of cheese, ice cream, fruit, chocolates or a chocolate mousse.

Mid-flight options for our 7.5-hour flight include fruit, biscuits, Red Rock Deli chips and Darrell Lea Rocklea Road, which we’re quite keen on sampling for nostalgia reasons (when we requested it, however, it wasn’t available on our flight despite being listed on the menu). The pre-landing snack is a Cornish pastie or Asian noodles.

Champagne onboard is listed as either Duval-Leroy Brut or Jacquart Brut Mosaique, both quite unconventional choices. We’re not informed which one is being served on our flight, but whichever it is, it’s pretty tasty. The beer choices also lean towards the more unusual side – Hahn, James Boag’s and Heineken, with Kirin and Tsingtao available on selected flights. Sake is also served on Japanese flights which is a nice touch.

Wines are described simply as ‘premium Australian wines selected by the Qantas Rockpool Sommeliers’ which really doesn’t give us much information as to what’s on offer. We did enjoy the Xanadu Margaret River Chardonnay, however.

Cocktail options are brief, listed as Bloody Mary, Campari and soda, gin and tonic and vodka and ginger beer. 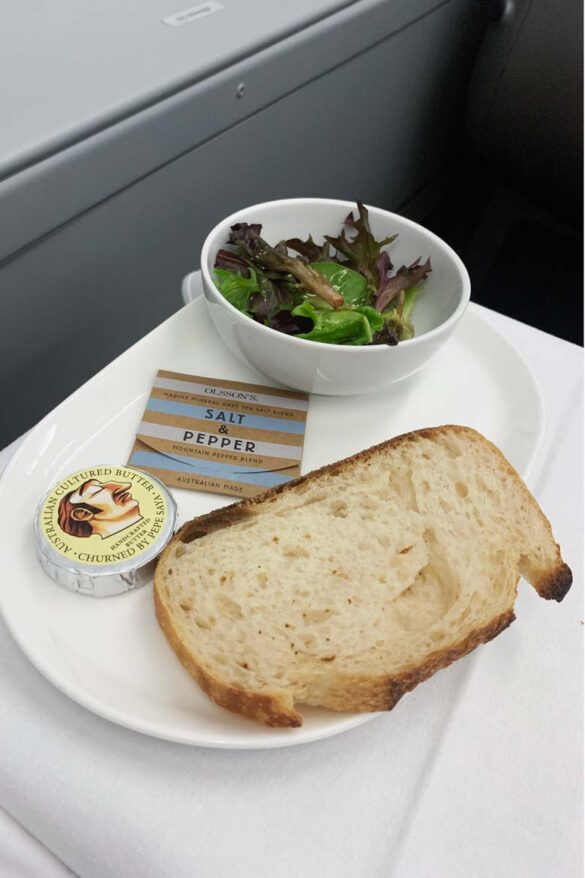 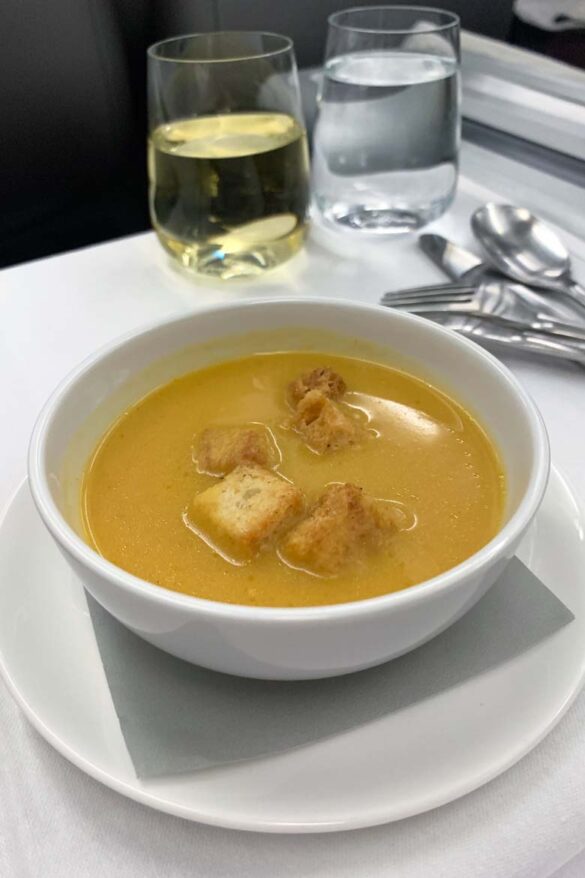 There are no pre-dinner drink/nuts/chips served on our flight, instead, we head straight into dinner after takeoff. We’re not sure if that’s due to our flight’s four-hour delay, making takeoff closer to 9 pm than the scheduled 4 pm, or if that’s standard on this route.

Dinner service starts with the side salad, which is really just a very small bowl of greens, but admittedly, a very good one. We’re offered a choice of sourdough or soy and linseed bread and our choice of sourdough is perhaps more sour than most these days, but perfectly pleasant for aeroplane bread. It’s served alongside artisanal Australian butter and salt/pepper, lovely even if our ‘marine salt’ seems to have retained a little too much of the ‘marine’ factor and is damp and clumpy. 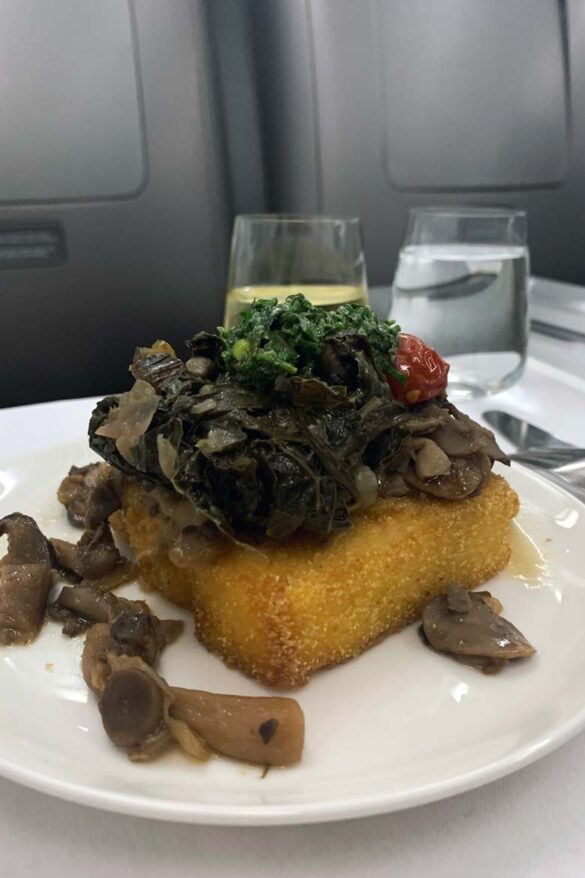 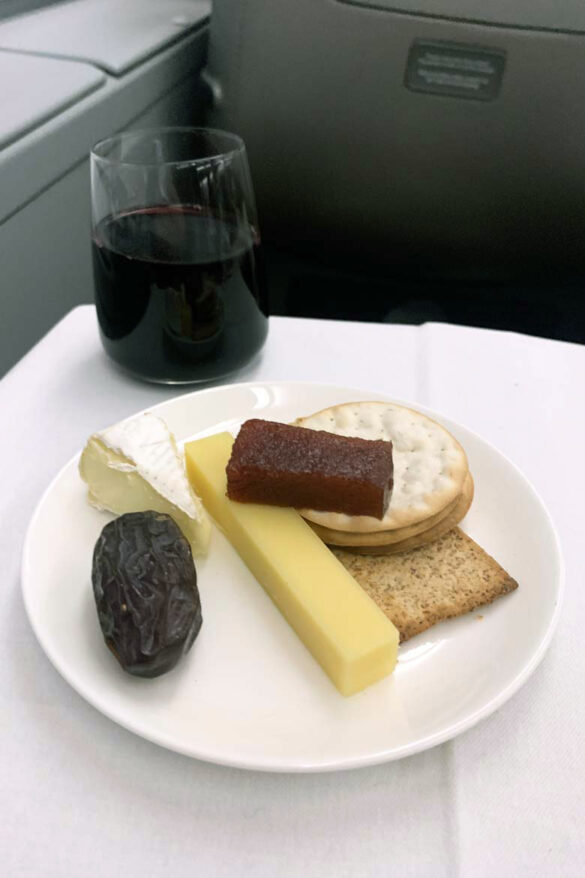 Our Roast pumpkin soup with garlic and thyme croutons is superb and rather moreish, and while our initial choice of main isn’t available, our vegetarian option (we dare think it might even have been vegan) pleases. Billed as Pan-fried polenta with braised greens, mushroom ragout and salsa verde, this dish manages to pack in a great amount of flavour despite sounding quite simple. Dessert is served trolley style, and we finish with cheese, as always. We’ll be honest, we’re relieved to see that Qantas has opted for quality over quantity. They’ve created a small cheese plate that should suit most palates, sticking to the milder side of things – and that’s quite fine with us. We always leave our goat and blue cheeses on the Emirates cheese board, so to have a cheese board that consists of comté and brie alongside quince paste and a Medjool date is heaven for us (and a lot less wastage). We still wish that airlines would provide more than 3-4 crackers, however…it always seems bizarre to skimp on the cheapest part of the course.

Wines to come through the cabin a few times during meal service, but we’d be lying if we said we didn’t seriously miss the Emirates A380 bar. We’d happily pop up to get our own drinks if we could, but again, the 2-2-2 configuration makes it inconvenient from our window seat. It’s a full, and by full we mean sold out, Business Class cabin, and the staff are working at full capacity (but of course, in a very polite manner).

Each screen in business class is housed in the seat divider between each 2 seat pair, meaning that screens aren’t allowed to be used during takeoff and landing. The entertainment selection is fair, if not as extensive as Emirate’s ICE, but the screens are noticeably small.

Qantas’ biggest strength lies in its cuisine – their food is definitely some of the best in the game. We also loved that you could fit your mattress before takeoff (and no being woken up to remove it before descent).

There are quite a few weaknesses, however, mostly to do with the hard product. There’s a serious lack of privacy in the cabin, no single seats and both the IFE screen being based in the seat divider and the rather small screen let the brand down. In addition, our seatmate had issues with IFE and the massage function on the seats, we couldn’t order our choice of meal and also some of the menu listed snacks were unavailable. Add to this the fact that takeoff was around 4.5 hours delayed and it doesn’t make for the most ideal of flights. The staff did uphold their professionalism throughout, however, and were always apologetic when it came to changes or delays. We also noticed them taking particularly good care of their frequent flyers.

With no wifi, no in-flight bar, tiny IFE screens and a 2-2-2 configuration, Qantas seems a step behind its competition. It feels like a 777 product, despite being housed in the spacious A380 body. Ironically, Qantas appears to be starting to lift their game with their domestic and short-haul fleet, however, with some smaller planes boasting wifi and a much more modern business hard product. Would we fly Qantas Business Class again? Based on the current hard product and a situation in which we had a choice of other airlines, it would be a no. For us, there are just too many issues with privacy and entertainment for Qantas to become a favourite. This is a Business Class that is long overdue for an overhaul.

What are your thoughts on Qantas Business Class? 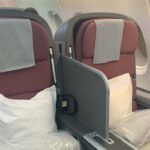 Resort Review – Six Senses Seychelles: Is This the...