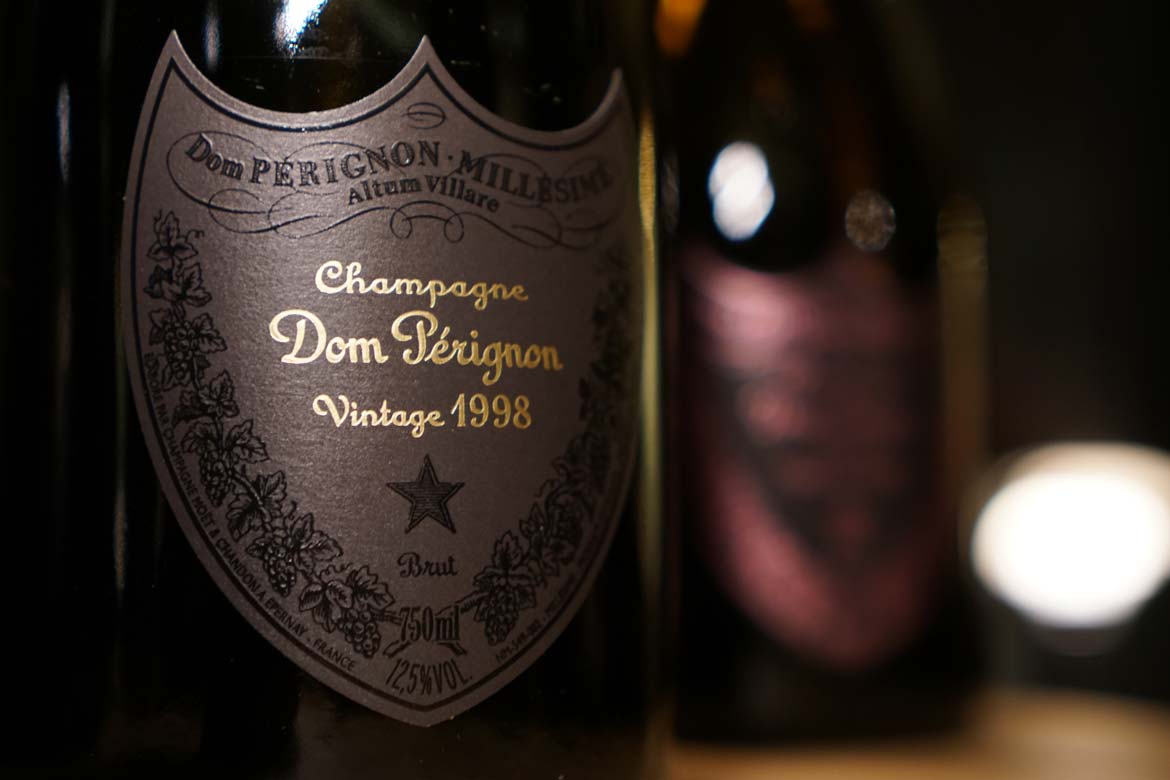 Curious about the secrets behind crafting Dom Perignon? Read on…

We were lucky enough to be invited to one of our all-time faves, Geranium in Copenhagen, to celebrate the release of three special wines – Dom Perignon’s 2009, their 2005 Rosé and 2000 P2. A brand with a legion of dedicated fans across the globe, the mere sight of a Dom Perignon crest elicits oohs and aahs from casual and seasoned wine lovers alike. But what lies at the heart of the house that makes it so lauded and lusted after?

The very core of the Dom Perignon philosophy can be summed up in one word: harmony.

“Harmony is intensity. The world of wine is often a power game…however in our view, the harmonies are invariably more intense than the power. We are definitely into the intensity game, and that intensity leads to emotion, and that emotion to memory.”

Richard’s vision is truly the heart and soul of the iconic house. His close relationship with the wines, which he often refers to as his children, is such that you might say Richard is Dom Perignon.

He says of his vision, “The vision is like the itinerary of a journey…once a journalist asked me, ‘Richard, do you travel with an itinerary?’, I said yes, as I do need an itinerary to venture out. Venturing out without an itinerary is a good case to get lost. And actually, I do know some people who are somewhat lost in wine making with so many options at stake. It’s very important to have that sense of direction, (thereby) allowing you to venture out, and venturing out at Dom Perignon is definitely venturing out in the vintage characteristics. I would probably say that as we speak, Dom Perignon is carrying the whole idea of vintage at the highest level of commitment and dedication.”

Dom Perignon’s dedication to vintages doesn’t make Richard’s life easy, but it’s easy to see by the fervor with which he discusses his wines that he relishes the challenge. He’s not one to shy away from a difficult vintage, or as he calls them, problem children…

“Vintage, in the cool climate region of Champagne, is a challenge. The cool climate is a constraint, and we need to turn it into the opportunity for surpassing ourselves. We’ve got to be on our toes, stepping outside our comfort zone, taking the risk. There is a lot of risk taking in making these wines.”

Richard’s philosophical approach to crafting Champagne offers much sage advice, applicable not just to winemaking, but life in general. He embraces the challenges and blemishes of each vintage, working with the wines to sculpt them into uniquely beautiful expressions of the struggle, rather than trying to make each conform to a singular house expression. I suppose you could say, he’s a new age parent.

“With 2009, for instance, I think we have been pushing the boundaries of ripeness to the extreme. That first decade in 2000 is really…so rich, I think it had some of the winemakers in champagne stepping back to an extent – I realized some of the winemakers of Champagne hadn’t declared a 2009, to my surprise. In my view, winemakers should be on a mission to make wine whatever, even in weakness, and come back with the great stories of the vintages. In any case, it’s about reinventing ourselves in and out, making these wines as exclusive in character as can be.”

Richard effortlessly recounts stories about each vintage, bringing to life the unique joys and frustrations of each.

So how does the youngest Dom Perignon, the 2009 vintage, compare to its predecessors?

“Does this 2009 have any resemblance to the past? I’m struggling to find any. in recent years I might say 2003, but it’s a different story. In 2003, we had a shutdown of the photosynthesis, phenolics were very high, it’s a way more dramatic wine than the very approachable 2009. Some people are telling me its sweet – sweet fruit. It’s not sugar sweet, it’s the actual dimension of the fruit being that lush, that ample, yet, there’s tremendous life, vibrancy and vivacity in the wine.”

“In 2003, which was the mother of all ripe years in Champagne to date, I was mentioning that the photosynthesis got shut down, in sort of a survival mode, to fight any dehydration off. It was so challenging – we had to take all of the challenges one after the other, and it was so rewarding to end up making something that singular, it gave us so much confidence in in pushing it that far, and I think that we have made 2009 all thanks to the experience of 2003. The process of winemaking at Dom Perignon keeps evolving, keeps progressing. Nothing is a steady state. Every single new vintage adds robustness to the project.”

The newly released Dom Peringon P2 2000 is, in our books, an absolute stunner of a wine, and our favorite of the three new vintage releases. P2 stands for second plentitude – the second expression of the wine, its second release.

What does the ‘plentitude’ system constitute?

“Plentitude is not just jargon – plentitude is a word about life, it’s a word which applies to all of us as individuals…it’s all about the radiance, serenity, lightness of being in maturity. Plentitudes come in succession, there are no less than three plentitudes. The wines are never developing on a steady curve, they develop on successive plateaus which are defined as many windows of expression which we decided to call plentitudes. Separated in time, over many years, when the wine stands up and speaks out, ln terms of something new enough, interesting enough, exciting enough, then we feel entitled to put it back to the light, to you. It’s many encounters with the same blend and same vintage. The second plenitude, comes at the age of no less than 15 years, and  there is a third plentitude, at the age of no less than 25 years, but often 35-40 years.”

“So the first plentitude…is about harmony. Everything is in place – the completeness, the complexity, the embrace, it’s Dom Perignon for the first time. From the first plentitude to the second, it’s as if time were energy.  The whole (program) of the plentitudes is based on the active maturation on the lees of the yeast, which actually make the wine sparkling in this bottle.  The sediment of of the yeast is feeding, nurturing the wine, the wine is eating the lees up, the energy from the living substance of the lees of the yeast itself is gradually transferred to the wine and it’s like time being energy. This one here (P2 2000), at the stage of second plentitude, is all about energy, intensity, vibrancy…something so penetrating, piercing in character. In my view, the the most striking selling characteristic of the second plentitude is depth.”

“It wasn’t the easiest wine to put together, it wasn’t as wow, as in your face, as upfront as 2009, 2002 and a few others, it had it’s own challenges in structure and winemaking, but all in all now as we taste it, I have a great sense of satisfaction. To be very honest, at the time of its first release in 07/08, I had really an element of frustration with the wine. Someone in my team said the wine is so elusive, it’s like Janus, as soon as you think you grab one face, the other comes around. It was very frustrating in a way. To my surprise, in those many extra years from first to second plentitude, the wine has come such a long way – to my surprise, it really went beyond expectations. I love this. In life I love to be surprised – obviously I need to control and master it to a large extent, but it’s great to allow an element of something. My theory is very simple, if i manage to get surprised with a wine, there’s a good chance you will be too – and surprise to me is essential, it’s what could be the ultimate luxury.”

“2005, what a challenge. It was the iconic ripeness, to be compared to Burgundy, and yet after a long, sunny, totally extraordinary ripening period in August, the weather turned not as great – wet, rainy, inevitably botrytis came out, and botrytis on the pinot noir was really a challenge. We had to sort it out, to isolate that little gem of something…it’s a tribute to the glorious grape variety of pinot noir. Pinot noir is the object of all fascinations, it’s a magnet to all of us, wine makers, wine lovers. On the wine making side of things, there is nothing more fickle or demanding than pinot noir, it keeps the vintners and the winemakers on their toes – so many things may go wrong in the process. In Champagne you worry so much about the spring frost, the botrytis, it’s a long journey to the picking and winemaking, and one has to keep humble with a project like pinot noir. It can take you from a hero to zero in no time, it keeps you on your toes from start to finish. Dom Perignon rosé is really a perfect blending of chardonnay and pinot noir, the yin and yang, harmony, intensity, emotion.”

Upper East Side Chic at New York’s The Surrey