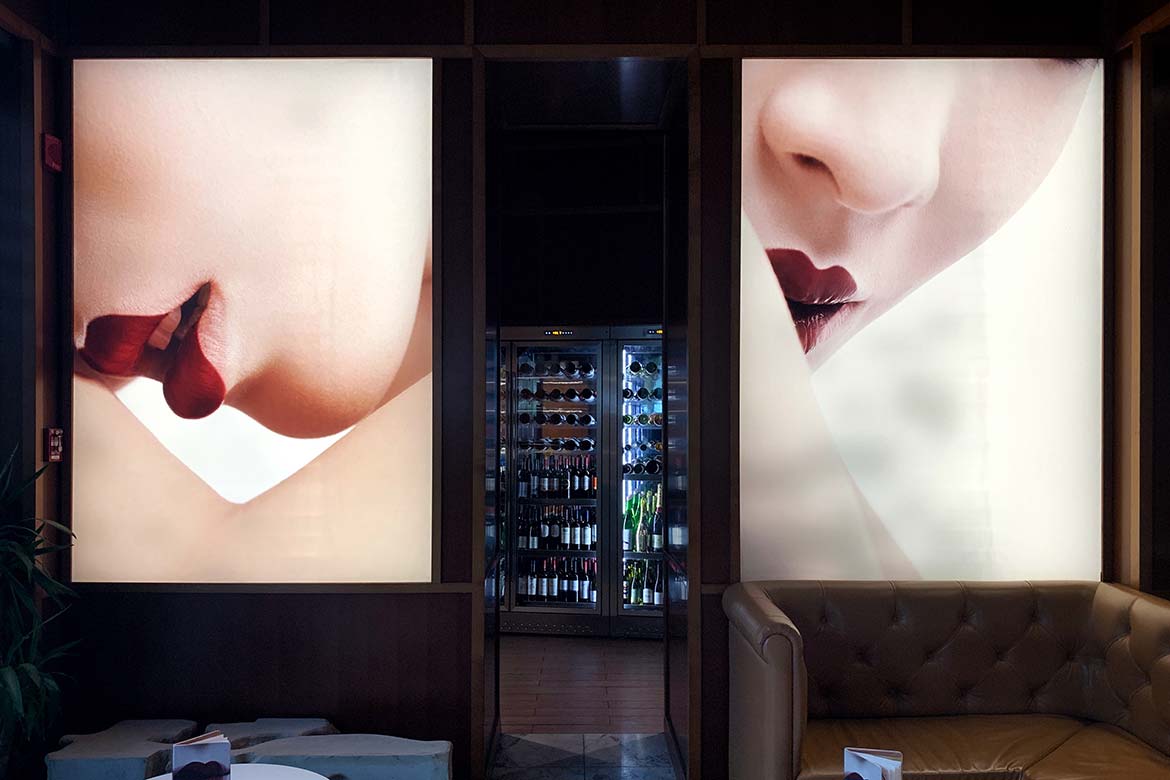 Trendy Hollywood import Katsuya by Starck has been resident in Dubai for a while now, so long in fact that they’ve managed to open a second outlet (at the Dubai Mall). Despite this, we still haven’t visited so the launch of their new Big Brunch is the perfect excuse for us to dip our culinary toes into all thing Katsuya. 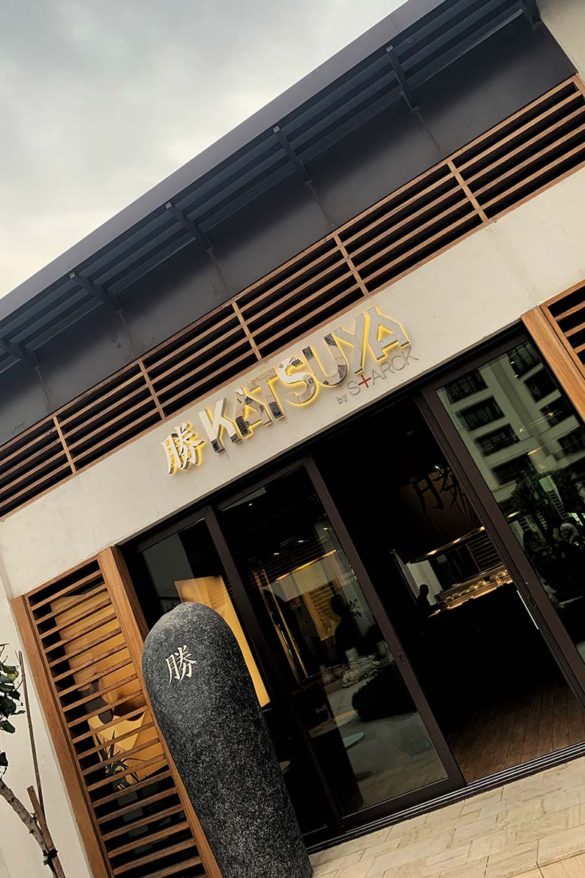 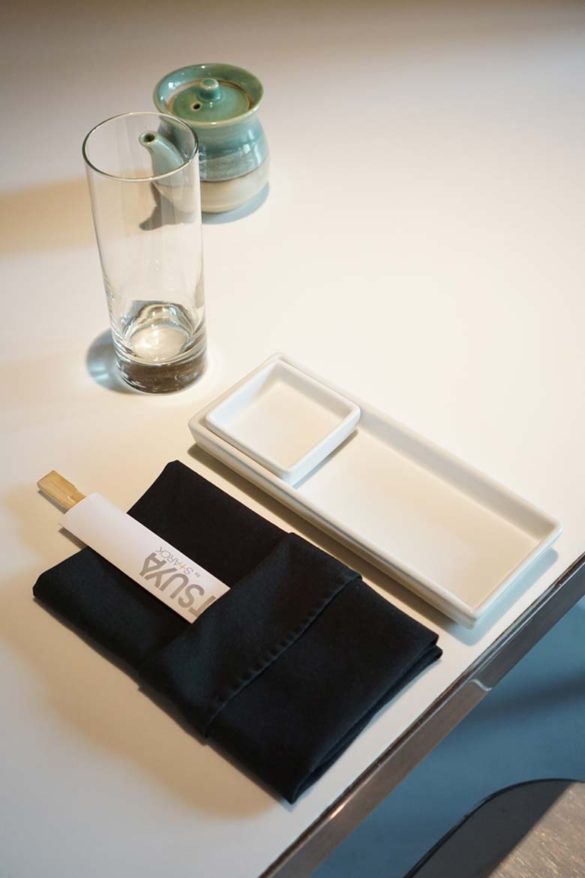 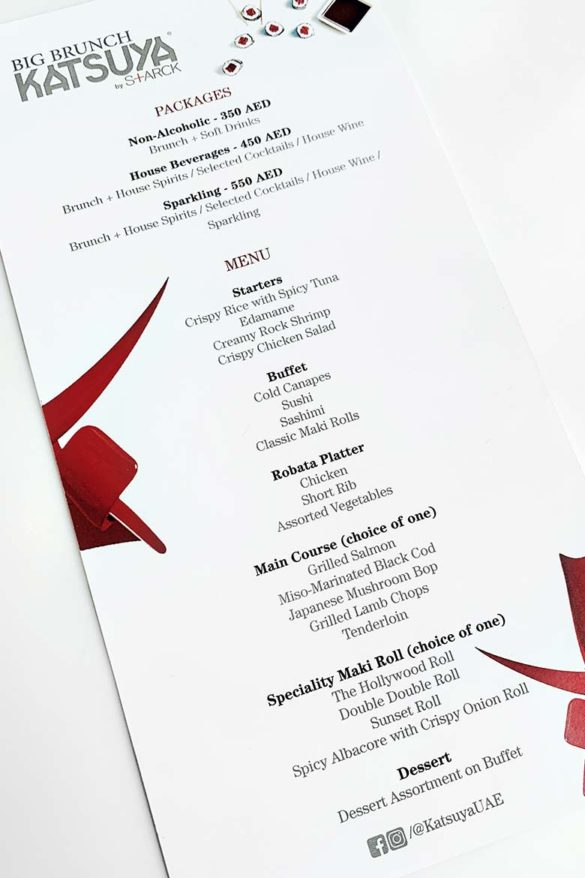 Packages start at 350dhs for non-alcoholic, house beverages will set you back 450dhs and if you want sparkling included in your brunch, add another 100dhs. The sparkling is Zonin prosecco, and given that the wines on offer are good and the cocktails fabulous, we don’t really see the addition being worth the extra spend – you’ll get the best value out of this brunch in the 450dhs package.

Speaking of the drinks, this is an area where the Big Brunch really excels. The Rosé (Lapostolle, French), Pinot Grigio (Da Luca, Sicilian) and Cabernet Sauvignon (Santa Julia, Argentinian) on offer are all good for brunch wines. No complaints there. The cocktails really steal the show though, in particular, the fabulous ‘Burning Mandarin’ with its light, fruity taste and fiery green chili kick. We also loved the Watermelon Mojito and their brown sugar take on the Old Fashioned. All amazing, a rarity at brunches these days (we’re told the mocktails were pretty darn good too). Our only gripe was a common one – we’d like to see them serve still water that’s not the rather unpleasant Evian. #Firstworldproblems, we know. 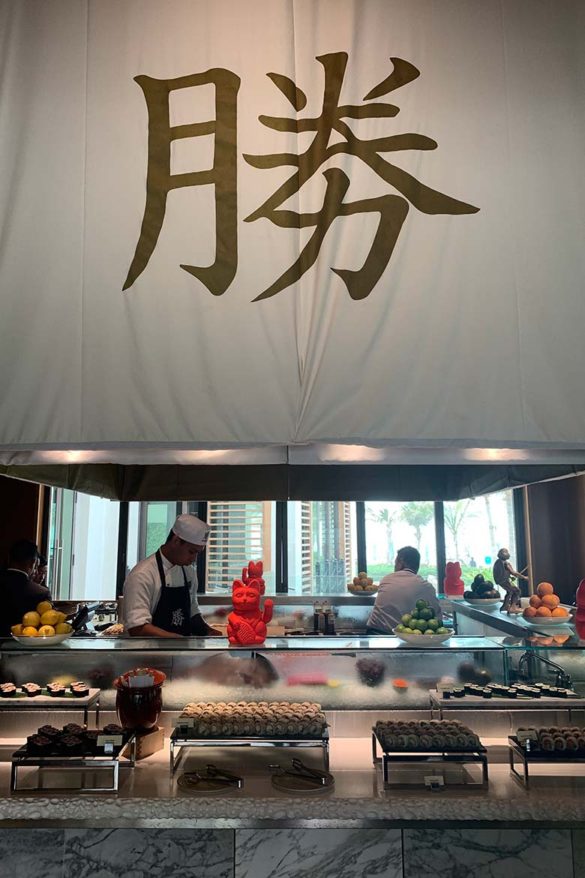 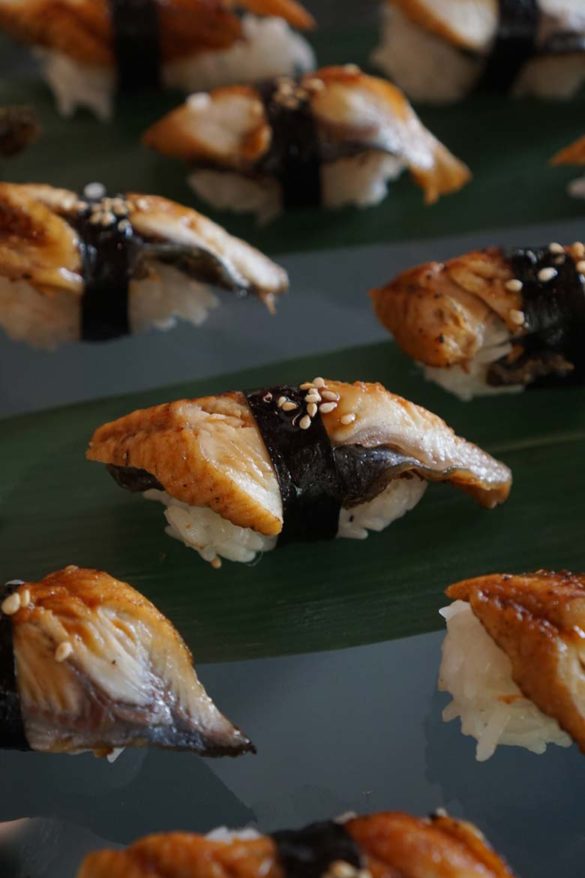 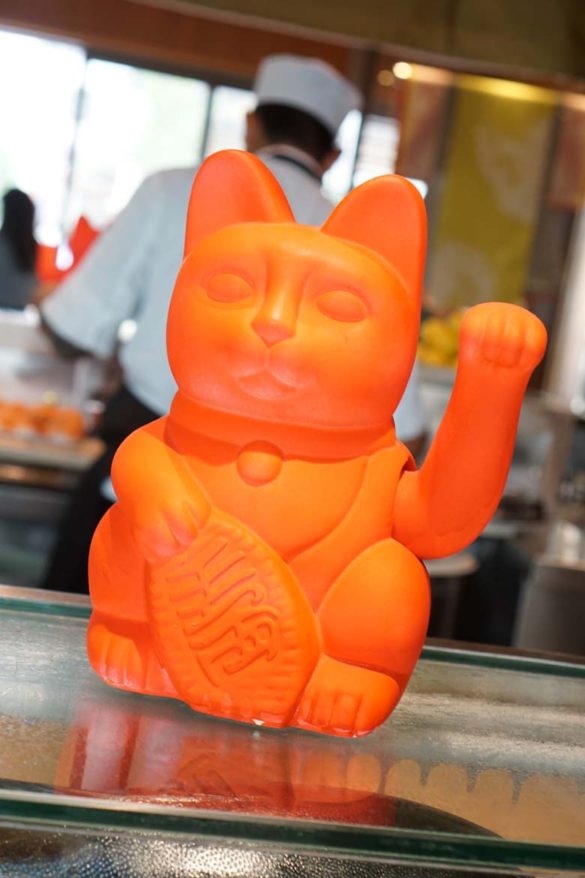 There’s a giant sushi buffet ready for you to dive into as soon as you arrive, as well as some other small cold seafood dishes. If you’re vegan, vegetarian or can’t eat seafood though, there are only two non-seafood options on offer – a small cucumber roll and a mixed raw vege maki. We found the sushi to be too sour for our taste, however so quickly moved on to the starters that are served to your table. 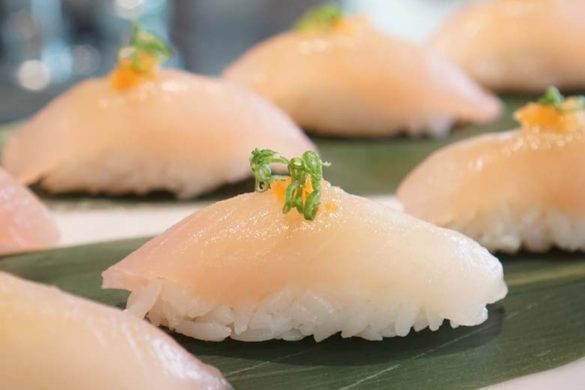 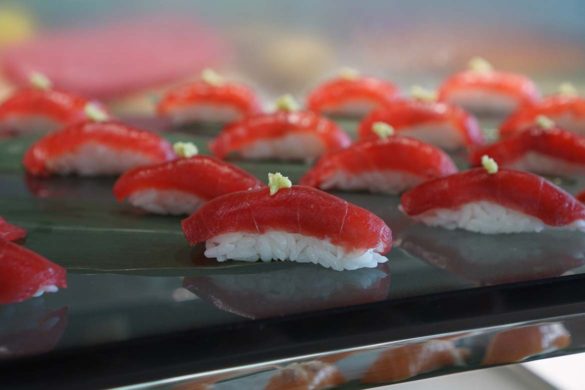 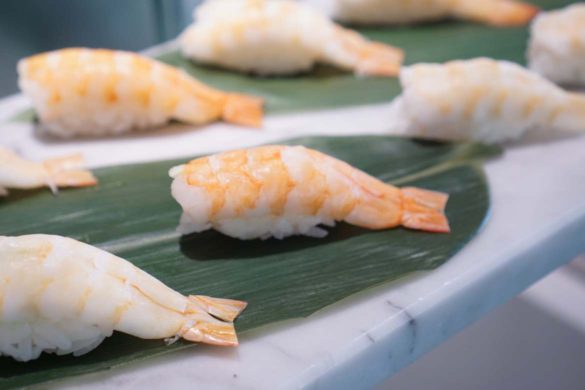 The starters portion of the brunch includes edamame, crispy rice with spicy tuna, creamy rock shrimp and crispy chicken salad. The crispy rice with tuna wasn’t a hit with the table but the other three were a resounding success. We don’t usually waste stomach space on edamame at a brunch, but Katsuya’s spicy sauce made these simply irresistible. The seafood eaters at the table raved about the creamy rock shrimp, and the crispy chicken salad was a unanimous favourite. So good in fact, we ordered a second portion later in the brunch. It might not sound like the most exciting dish, but it was gloriously tasty and light. It reminded us of Buddha Bar’s signature chicken salad, without the creaminess. 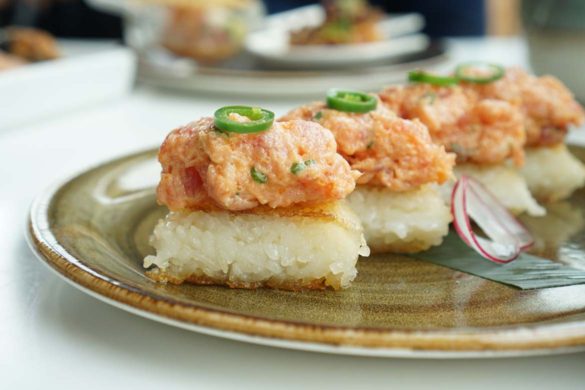 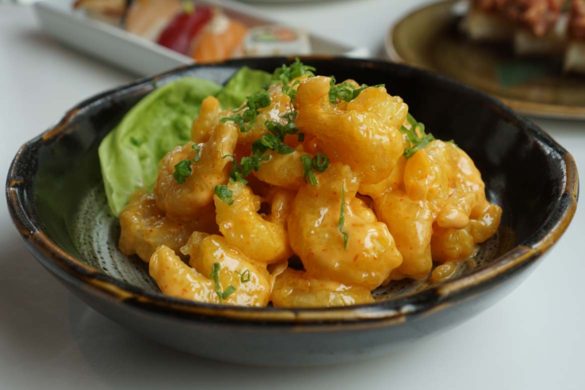 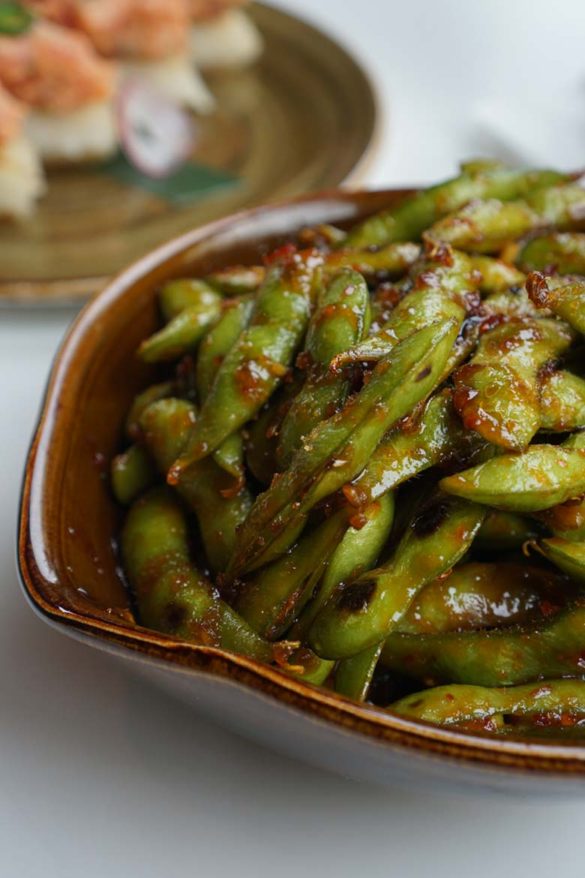 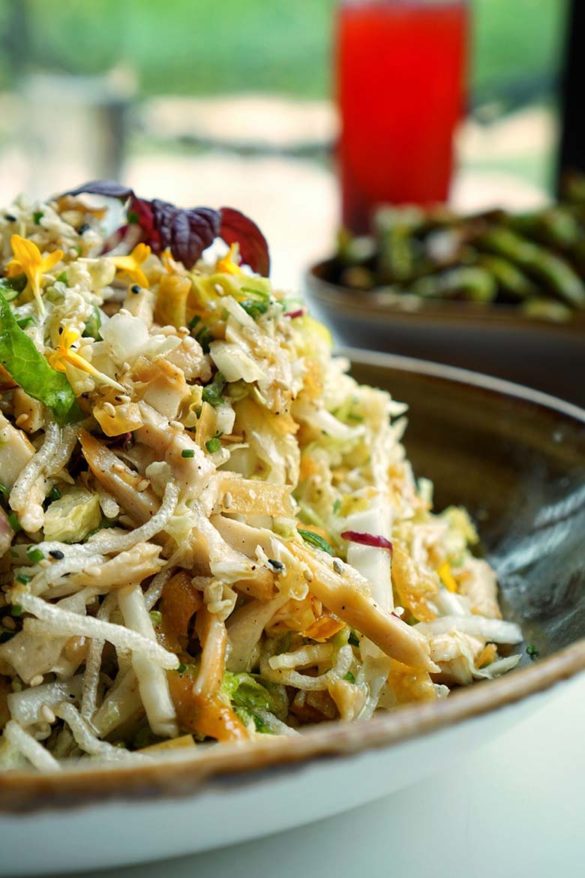 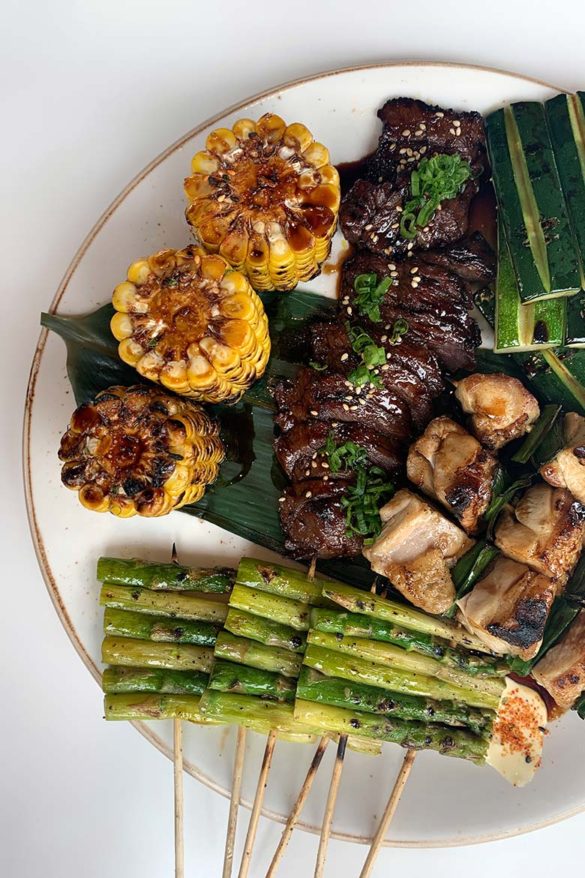 The robata platter arrives next, with one platter being served per two diners – a generous portion for sure. The corn and asparagus were delicious and far and away the best items on the platter. The courgette could have used a little more char but wasn’t bad, but things really fell apart when it came to the grilled meats. The chicken skewers were too chunky and rather dry and the short rib tasted fantastic at first…then the rather strange aftertaste hits you. Here’s hoping these might be improved in the future. 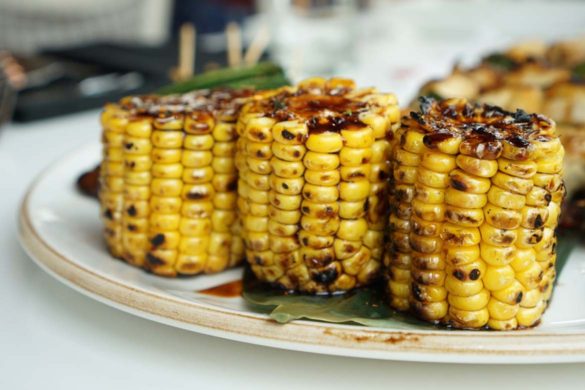 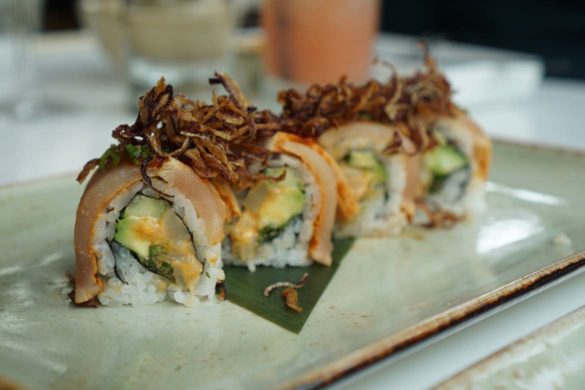 We’ve got to give Katsuya points for the size of the offering – this is definitely more than what you’ll see at a lot of trendy imported Asian establishments, who are notoriously skimpy when it comes to brunch (hello, Hakkasan). Portions start to get smaller from this point in the brunch onwards, however, and the menu gives the impression that you can’t reorder these dishes – the menu specifically states one main course and one signature maki roll per diner. The maki rolls are actually half roll portions, and again didn’t really excite the table. By this point, we’re starting to think that sushi really isn’t what you should come to Katsuya for, which is a bit perplexing. Perhaps it’s better when ordered a la carte on a normal day rather than brunch? 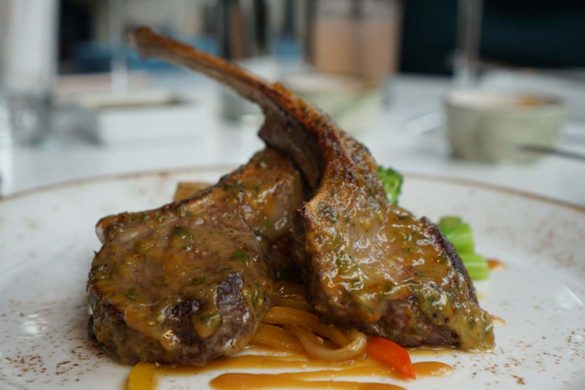 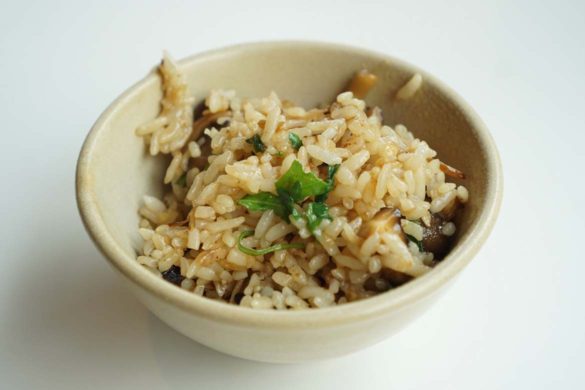 There are five options for your main course – grilled salmon, miso black cod, mushroom ‘bop’, lamb chops and beef tenderloin. The salmon passed muster as did the lamb chops (of which there are two in the serving), even though they came out close to well done instead of medium as ordered, but the mushroom bop, a fairly simple rice dish mixed with stock tableside, struck out across the table. The tenderloin was absolutely sensational, a huge improvement on the robata short rib – the only downside? It was minuscule! We’re talking probably less than a 1/4 of a steak here. We can understand that it’s clearly great quality so they have to watch the cost given it’s a brunch – but the portion was so small it was a joke. We’re just sad because it was so good! 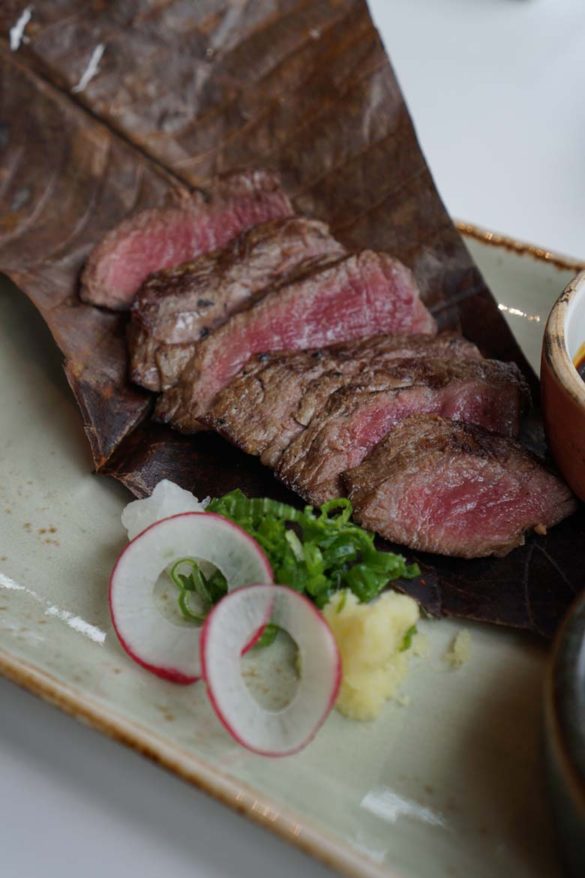 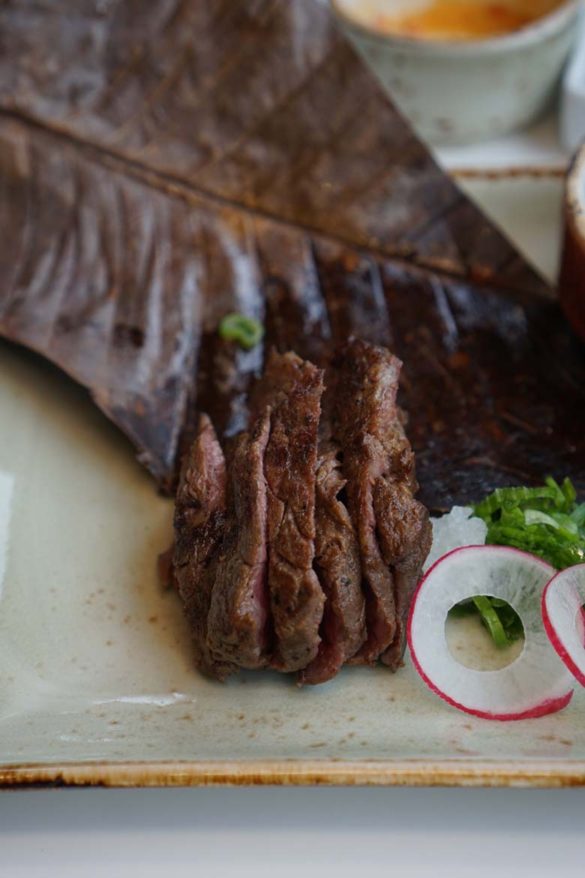 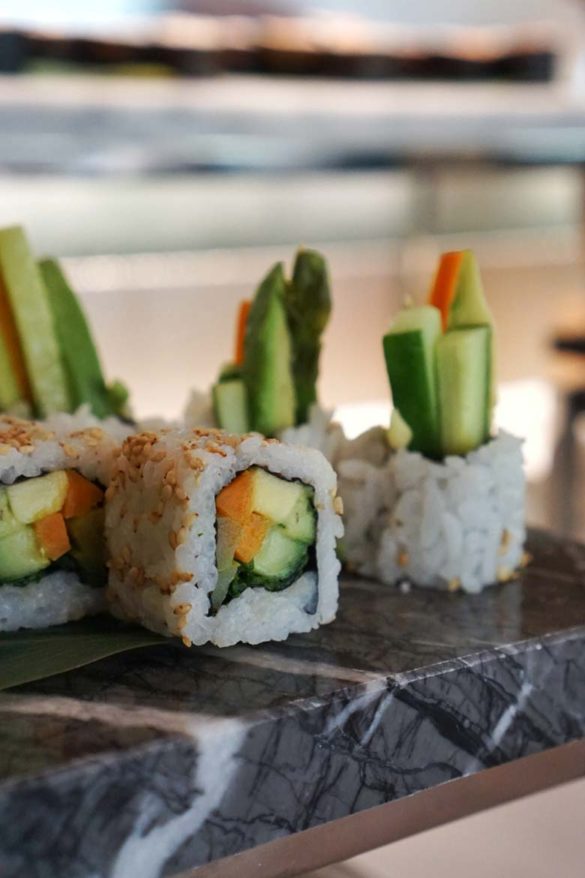 Luckily we don’t have much of a sweet tooth, because dessert is a complete afterthought at the Big Brunch. It’s a small buffet of miniature baked goods, including four versions of the same almond tart with different toppings. Quite a few options were completely gone by the time we got to dessert, as our main courses didn’t come until 4pm. (The brunch runs from 12-4pm, with last drink orders at 3:30 – why not just say it’s 12-3:30 then?) Here’s hoping that these timing issues are just teething problems, we did attend the inaugural brunch after all. The pastry cases also had a ‘baked on’ and ‘best before’ sticker on the bottom, stating they were baked the day before. Really wasn’t the best impression to end the meal on. There were also some sorbets brought to the table, which were nice enough, but we can’t ever say we’ve been excited by a scoop of sorbet. 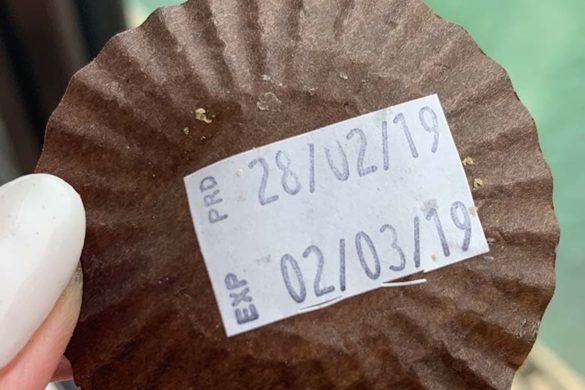 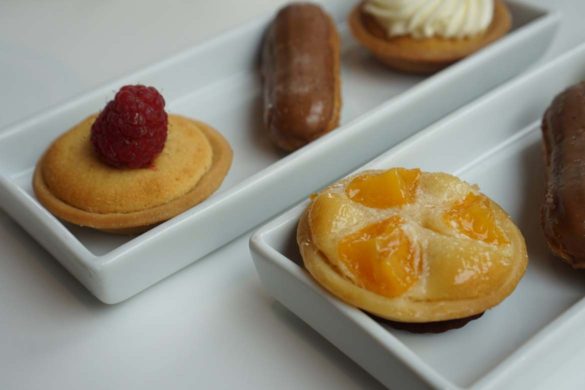 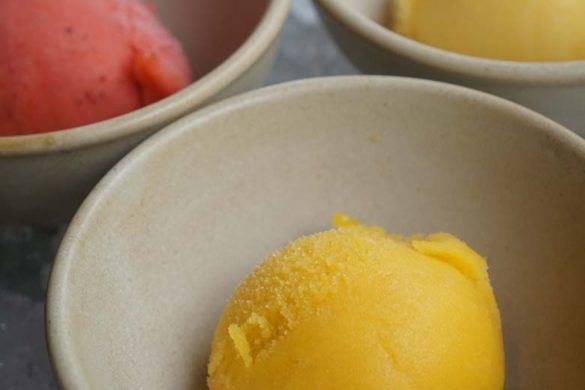 Seafood lovers, this is a brunch worth checking out. If you’re vegetarian, vegan or don’t eat seafood, give this brunch a miss. There’s not much on offer for those diners and the kitchen isn’t willing to make any allowances for diners with dietary requirements which actually shocked us quite a bit. You’ll get the parts on the menu you can eat, and even if that’s not much, there’s no flexibility there or desire to really care about those guests – considering how many more options the main menu has in the vegetarian and meat department, it’s a shame to see how narrow they’ve made the brunch focus, given that the offering really is a decent size. 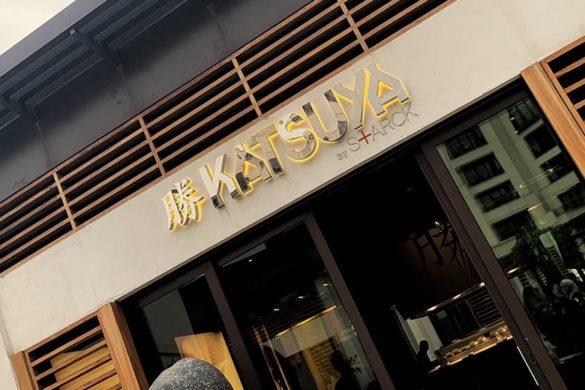 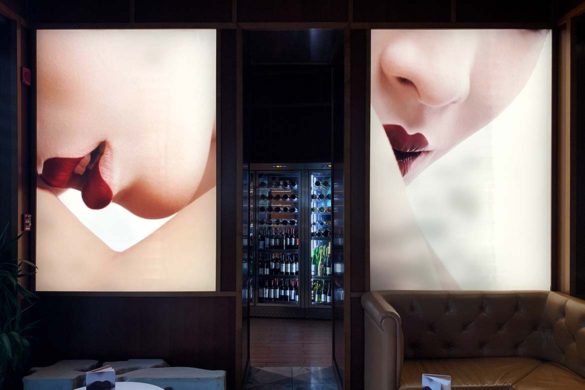 Atmosphere wise, well, there really isn’t a lot. The music was good and not too loud (hooray) but the dining room (the one we were seated in, at least) has such a light, airy and casual feel that it felt more regular lunch than Dubai brunch. If that’s your thing, fab – it’s probably well suited to families for that reason. We just think it would have killed if it had been in a more dark and moody setting like the decor at Hakkasan.

Overall, our table’s verdict was that Katsuya’s Big Brunch was a bit of a mixed bag. There were some hits (the cocktails, spicy edamame, vegetable robata, chicken salad, creamy rock shrimp and the majority of the main courses) and some misses (the sushi and buffet items, the crispy rice with spicy tuna, the signature rolls, meat robata and dessert). Would we return? Yes, but perhaps to try the a la carte menu instead – there’s plenty of dishes not on the brunch menu that sound very enticing. 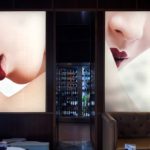 The W is Back and so is Akira…

Avli by Tasha Brings Yet More Greek to Dubai

The W is Back and so is Akira…