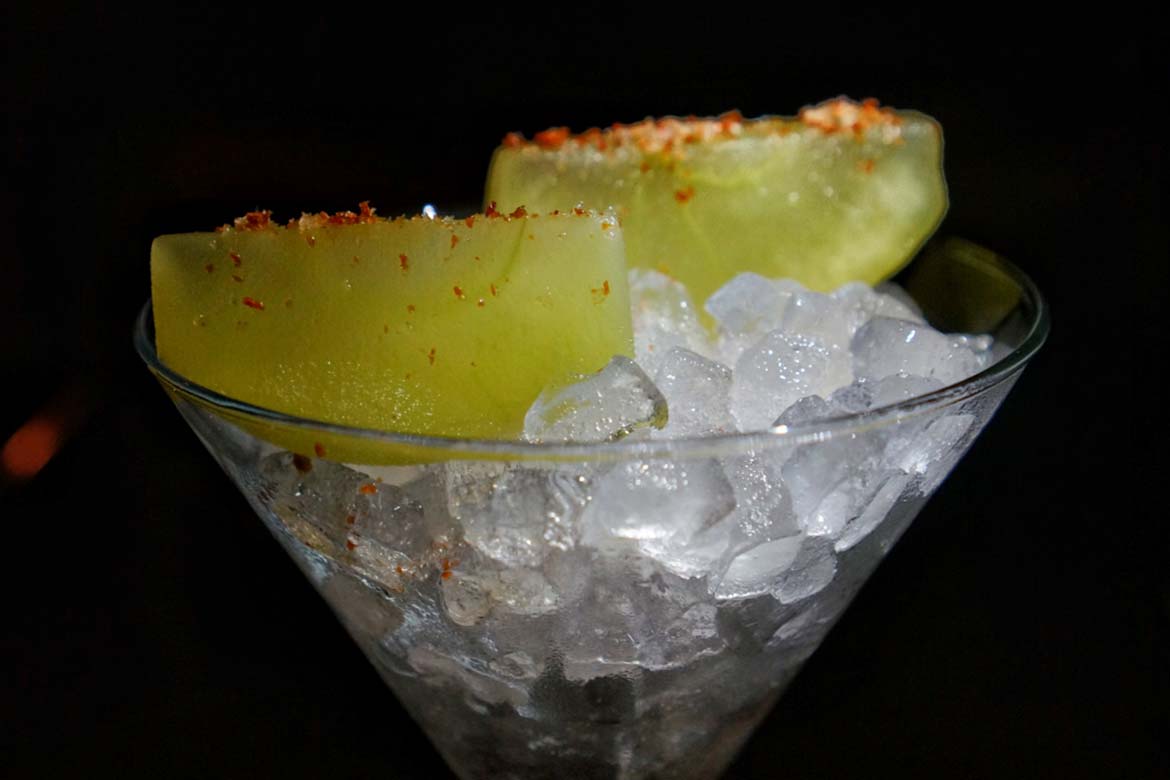 If you love Tickets in Barcelona or are just a fan of fun food, then Mini Bar has to go on your must-visit list when in Lisbon.

Part of Jose Avillez’s impressive stable of Lisbon restaurants (which includes top 100 restaurant Belcanto), this for me is the type of experience that puts the life back into fine dining. It’s crazy, sexy and full of surprises. You can embark on a set journey, or just take your pencil and tick away on the list of dishes from which to choose. We chose the latter. Place your order and get ready for a playful journey in moody, dimly lit surrounds with a great soundtrack.

As you can see, it’s a frenetic, freewheeling journey through Mini Bar’s menu – yet we could still do round two and try a whole set of new dishes, so extensive are the offerings. 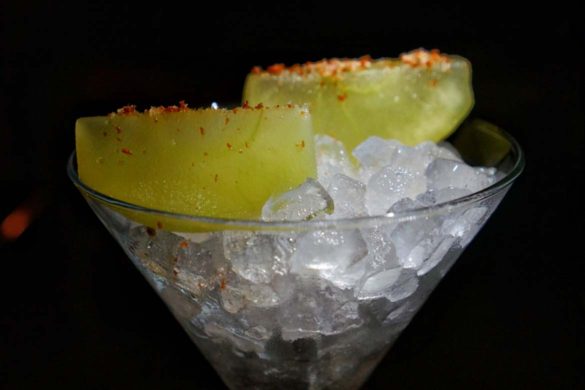 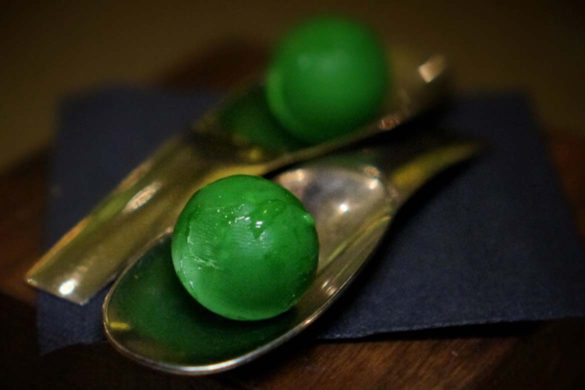 Cocktails aren’t just in drink form here, they also pop up as tasty starters. The Green apple and spearmint margarita and Caipirinha were the perfect way to kick off proceedings (though the caipirinha was just like the one we’d had a week earlier at no.16 Azurmendi – no complaints, though, it’s a fab idea). Sure these bites might not have the longevity of a cocktail, but at these prices, who cares! 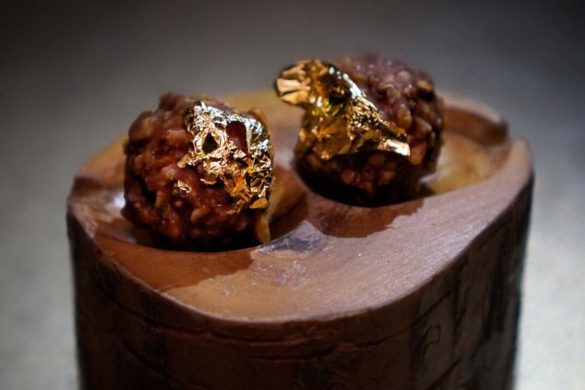 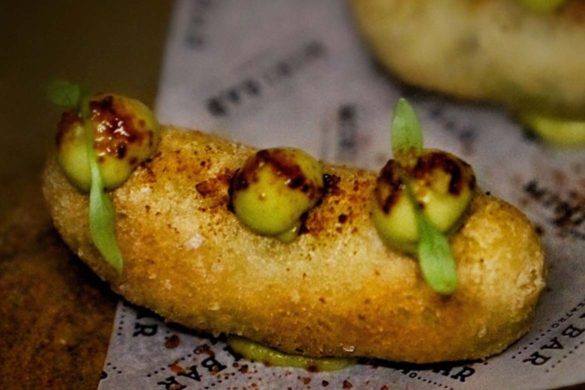 You’ll see some classics pop up from Belcanto’s culinary playbook too – the take the ‘Ferrero Rocher’ for one. Another bite that closely resembled one I’d just had at Azurmendi, but I have to say Azurmendi’s rendition has the edge. Let’s just say it looks like a Ferrero Rocher, but there may be foie involved…if that ingredient isn’t your cup of tea, perhaps pass on this one. Another that you’ll see at Belcanto is the liquid olive sphere. How can anyone resist the classic El Bulli ‘olive’ when it’s on the menu? I never can, and I love seeing people’s faces when they try it for the first time! It’s a must order, and never disappoints. 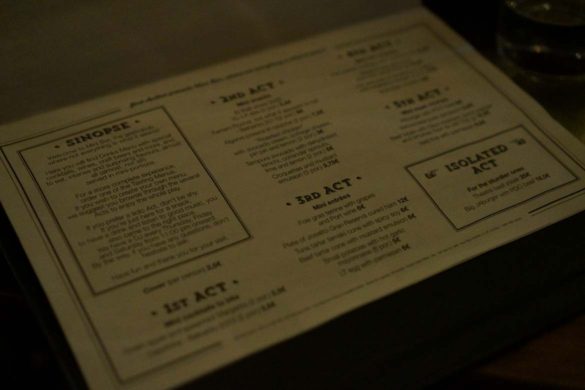 The ‘Roasted Chicken’ has all the flavours you would expect, but atop a chicken skin. Love the concept, but the similar dish I had at Belcanto the following day definitely trumped the Mini Bar version. The risk with chicken skin is sometimes it has a peculiar, chemical taste, and that’s what happened with our batch. Not so at Belcanto – so maybe it was just a bad chook. The tempura avocado bite, however, is delish and full of life – why don’t we see tempura avocado on menus more often? The combination of creamy inner and crisp outside is so indulgent.

Time for some classic ‘fast food’ fare – meat and fries! But in this instance, it comes in the form of a tartare cone, sliders and adorable mini potato rounds. The tartare was too chunky for my liking so took a bit of chewing, but the presentation is worth it alone. I’d just like to see a finer dice to make this bite perfect. The sliders are insane – especially the pork! We saw the table next door order a repeat of the sliders and potatoes – so take that as a vote of confidence that hey, they’re pretty damn good. 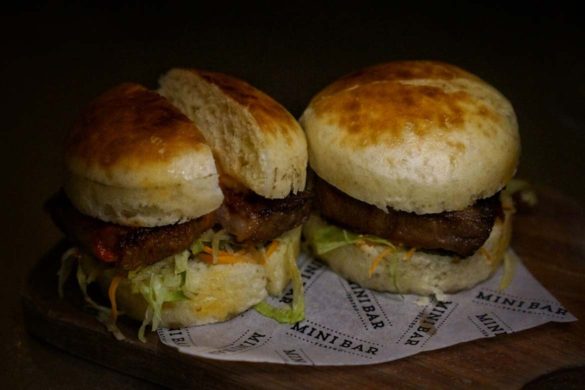 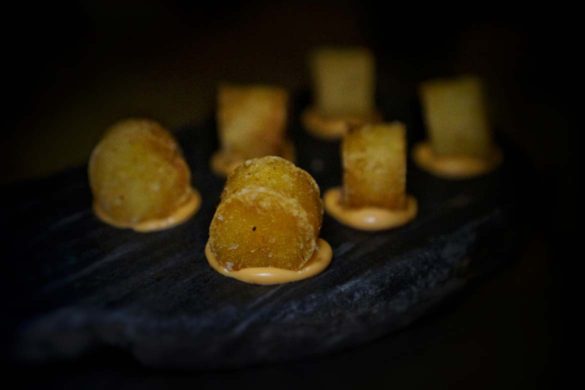 For those who want more meat, the tataki is just as good as one would imagine in an establishment as renown as this one. I was tempted to order round two, but alas there were sweets yet to try! We went for the chocolate cone with fleur de sel (yum) and a delish dish that is also related to a Belcanto finisher – it’s a giant green sphere but not on the online menu. Rather fab though and a fave amongst our table. Order it. 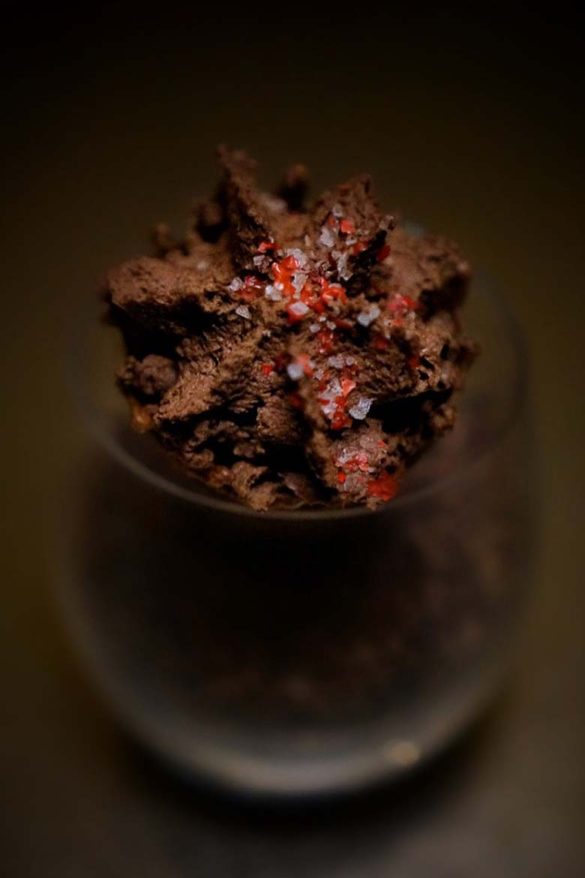 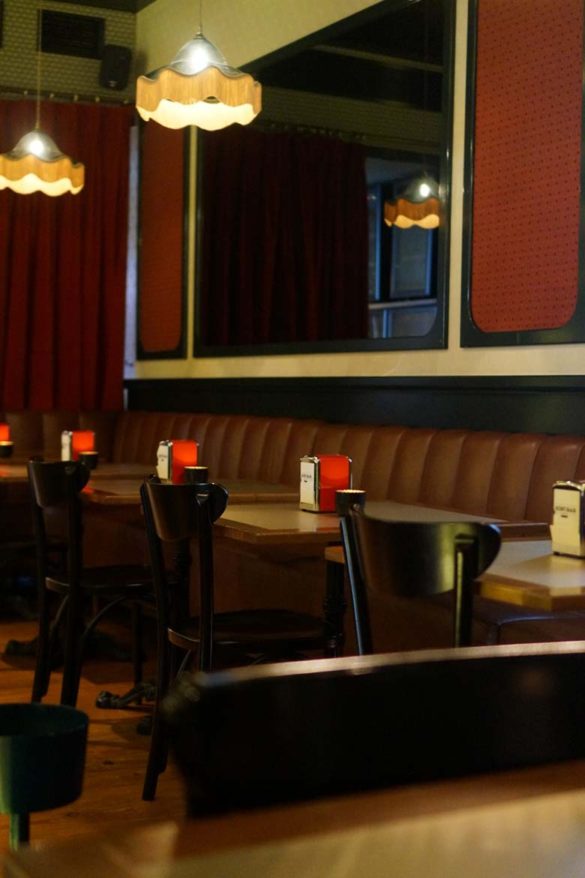 Petit fours end the night nicely and although we are so full, I don’t think I wanted the journey to end. It’s a fab pick-a-path journey that can be as long or as short as you want it to be – but trust me, go long. Go very long. The best part? Even though the Mini Bar journey has ended, Jose Avillez has so many fab venues in Lisbon right around the corner that you can sample some of his culinary wizardry every day of your visit should you wish – and I recommend that you do. 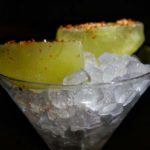