Despite being a stalwart on the Metro Top 50 scene since it’s opening, Ebisu’s menu had never been able to lure us to its waterfront location, even though we’ve dined all around it over the years. This time, however, some delicious sounding dishes and multiple mentions of truffle managed to get us over the line.

We attempted to book on the fly, as we tend to do when we’re on a trip. A broken mobile website was not a great start, but there was still a link to their booking engine – it informed us there were no tables for three tonight, but try and call the restaurant. The restaurant, I was told by whoever answered the phone, did indeed have many tables available tonight, and didn’t I know they don’t take bookings for small parties? (A message that doesn’t show on their broken mobile site, by the way, which simply shows a booking engine that is indeed set up for small bookings.) We are told that yes, they know their mobile site has been broken for a while now but they aren’t sure if/when something will be done about it. We suppose this should have been a warning sign that the finer details are perhaps not top priority at Ebisu. 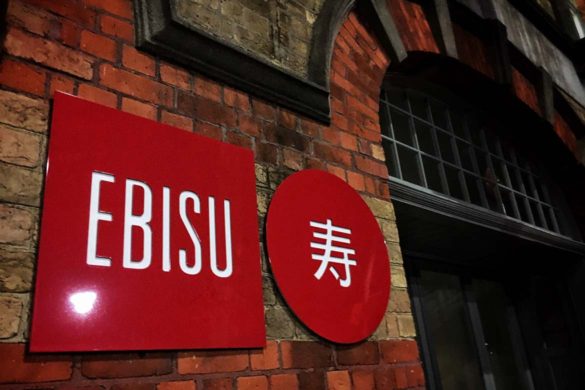 We rock up to a large and dimly lit industrial space that’s on the minimal side when it comes to decor, save for a row of picturesque cherry blossoms. The menu looks divine (though the wine selections are a little thin on the ground and a tad pricey, but I’m told sake is really their focus here), it’s well constructed and just the right size.

The choices on offer are a mix of small and large plates, and the above was an adequate serving for three people. We’re told to order sharing style as dishes won’t arrive simultaneously. No problem there, we prefer a sharing-style format over a la carte anyway.

We may not be at a fast-food restaurant, but this is fast food restaurant – the karaage, salad and tempura arrive speedily. The karaage is juicy and delicious, though the pieces are very large and require a lot of nibbling to get through. Ask for some mayo on the side – doesn’t Japanese mayo make everything better (especially karaage)? We think we prefer the version from Fukuko we had years ago, a tiny joint situated out the back of Ebisu (we believe they may share a kitchen), but this is good stuff – we’d just like more manageable piece sizes, especially when sharing.

The tempura is also jumbo-sized, and tasty too – the large pumpkin slices win over the more floury kumara pieces, so get in and fight your fellow diners for those first. The batter is lovely – light and crispy, and the dipping sauce ain’t half bad either. The ‘Paper Thin Salad’ could be more accurately described as ‘Perhaps More Like Cardboard Thickness Salad’ and while its curls were a beautiful surprise, they really needed to be thinner to integrate well with the dressing. Points for presentation, however – it’s a pretty plate. 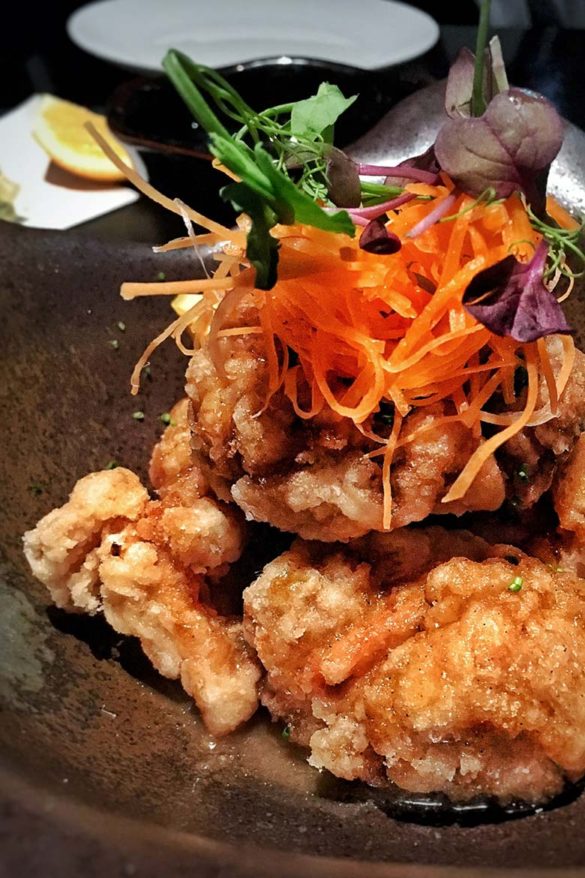 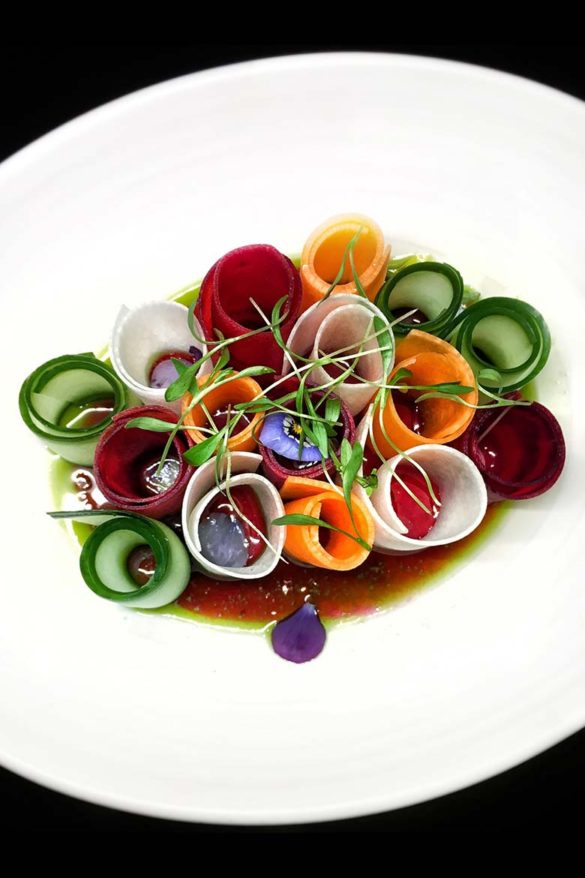 Before we’ve had a chance to finish these dishes, the large plates arrive and suddenly it’s all feeling much too fast-paced for us. We don’t want our dining experience at this type of establishment, and at these types of prices, to feel rushed – and that’s exactly how we feel. With our entire order arriving in such quick succession, we were too full to enjoy the large plates and found ourselves just forcing the food down hurriedly as it was all going cold. For us, the pacing was completely off here, and no it’s not because of the sharing plates / ‘it will arrive when we want it to’ system, we’re no stranger to that. The call for last orders around 15 minutes later makes me wonder if they were just trying to rush us through in order to close up (despite our order not being late in the night and there being around ten tables seated in the restaurant). This notion was reinforced when they began ‘spray’n’wiping’ the tables next to us – we can confidently say that wafts of cleaning spray don’t really add anything good in terms of aroma or taste to your meal. Unsurprisingly, it also doesn’t make for a pleasant dining experience. 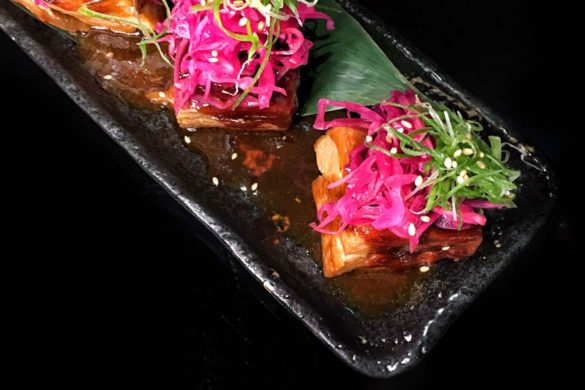 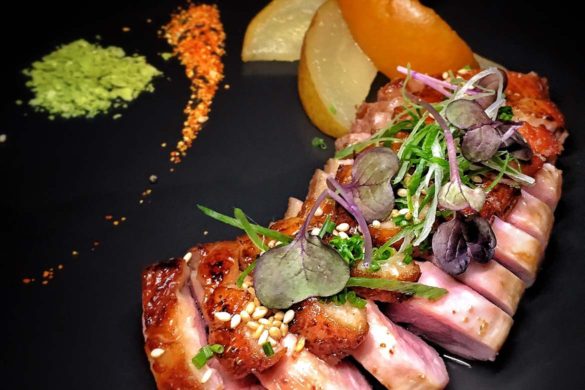 Back to the food – our ‘large plate’ dishes ticked the boxes in both the ‘yummy’ and ‘would order again’ category. The pork belly was sticky and sweet, with five large chunks adorning a long plate. Again, we’re in a sharing scenario though, and five doesn’t usually divide into the number of diners at a table. The pork was a tad dry and not quite tender enough to break up with your chopsticks, so you’re left having to attack the meat caveman style with chopstick spears in an attempt to make it more divisible between diners. A larger number of smaller pieces would have made life much easier (or hey, slightly more tender pork would probably do it too).

The duck breast was well cooked, though tenderness varied with which piece you chose. The plate was sprinkled with two great garnishes – shichimi, and an amazing green tea salt. The sweet, salty and spicy flavours really worked with the sour pickled pear to create a satisfying and interesting dish. It did have some of the same issues with eatability though – it would have been a cinch to navigate with a knife and fork, but if you’re only given chopsticks then this needs to be considered. Fine curls of pickled pear would have been much more appropriate than three large chunky slices that were hard to eat in combination with the duck (thinner slices of the duck may have avoided some of the chewier portions also).

All in all, Ebisu was a somewhat confusing experience. The flavours are great, and it’s definitely worth a visit for the food alone – but it’s the little things, the execution, that lets them down. Those things that Michelin inspectors look for, the difference between achieving a bib gourmand and a star, between one star and two. That lack of ‘minding the details’ that we encountered when booking was echoed with the unnecessarily speedy pacing, dish presentation that while really beautiful, didn’t lend itself to the dining equipment provided (in this case, chopsticks), and that feeling that the staff really just wanted to get outta there – going as far as to be spraying down tables next to diners still eating. If it was midnight, ok I get it – but 9:30? Guys, Auckland’s not that sleepy! Diners should never feel like they are being rushed out of the establishment. I think it’s time to put a little love back into the art of hospitality at Ebisu – but send my (well deserved) regards to the chef.

How Miele is bringing life-saving tech to your...