New Zealand. We’re a young country. It would be fair to say that for most of our existence, we’ve hung our culinary hat upon cuisines from other cultures and lands – British, French, Asian. We’ve fought over who invented the Pavlova, whether Marmite is better than Vegemite and which three veg should accompany the meat. Things are changing rapidly, however, with a group of passionate chefs and restauranteurs working feverishly to change the way we see New Zealand food and ingredients. At the pointy end of that charge is Chef Vaughan Mabee of Queenstown’s Amisfield Bistro. With renown forager Peter Langlands at his side, Vaughan is creating a symphony of sublime dishes that showcase native New Zealand ingredients in ways this country has been missing. 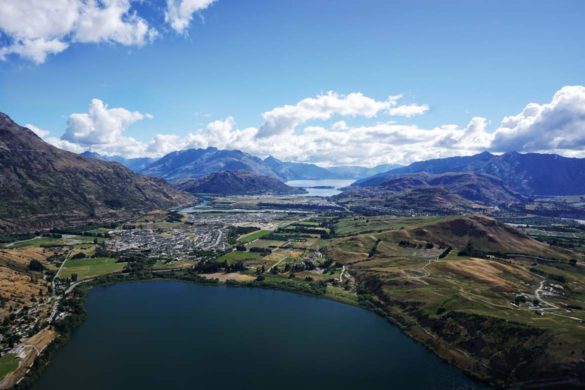 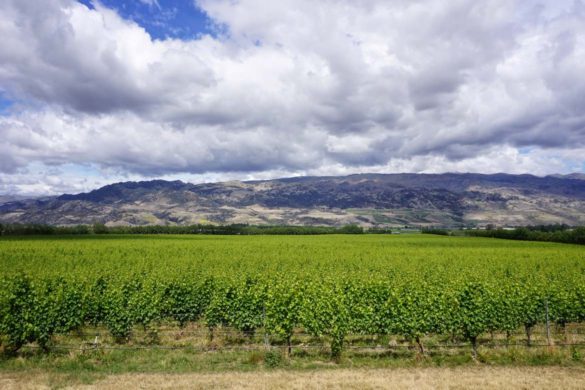 The buzz about Amisfield Bistro has been building for some time, so we’re excited to be finally heading to Queenstown to see what all the talk is about. Amisfield’s always had an exemplary reputation when it comes to its winemaking…add amazing food and the combination has surely got to be hard to beat.

New Zealand’s dining scene is finally coming of age, with a rapid progression in technique, taste and innovation noticeable in the past couple of years. Part of this trend is attributable to our kiwi chefs finally coming home to roost after their global culinary adventures, and Chef Mabee is no exception. Having spent years honing his craft at legendary establishments such as Spain’s Martin Berasetegui, Vaughan is one of the growing number of talented culinary professionals bringing this priceless experience back to NZ kitchens. 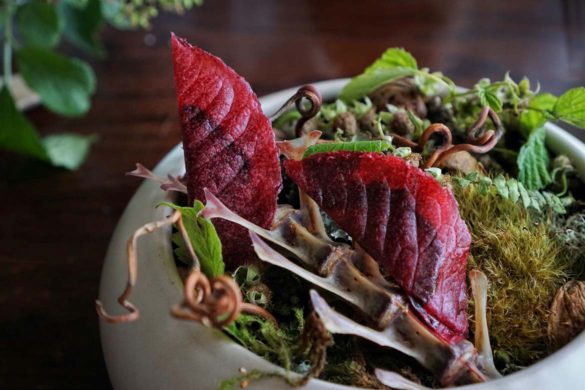 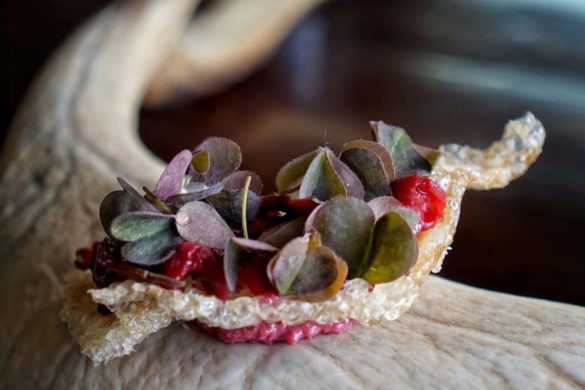 Amisfield has blossomed under Mabee’s direction, transforming from casual a la carte offerings to ‘trust the chef’ only tasting menus. Choose from 3 ($75) or 5 ($95) courses at lunch or 7 ($140) at dinner – all with lots of extra surprises and snacks along the way. Being that the property belongs to one of NZ’s best wine producers, you’d be mad not to also partake in the beverage pairing, showcasing a broad range of Amisfield’s varietals as well as, surprisingly, some non-wine creations also. 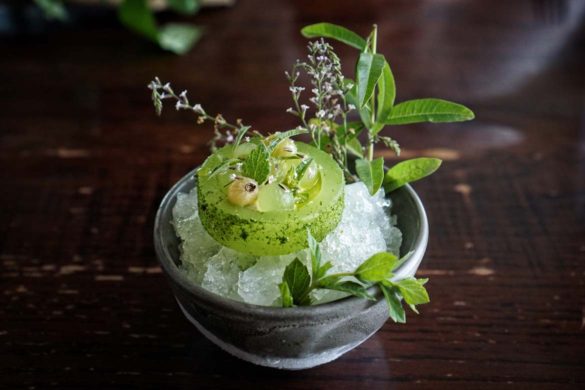 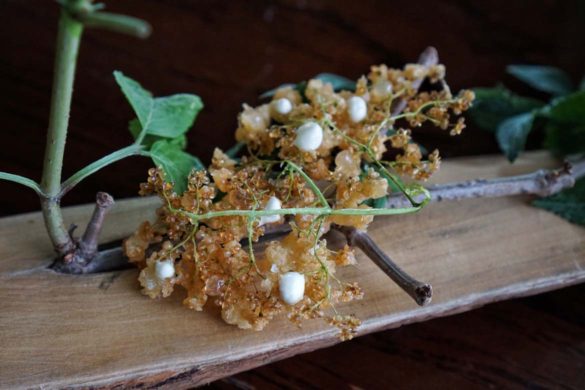 Our Amisfield dining experience kicks off with the house brut, served alongside the first of many snacks of the experience, each with plating as intricate as the edible portion of the dish. A delightfully pretty dish of gooseberry & verbena cleanses the palate for the approaching onslaught of nuanced flavors, and a branch of tempura elderflowers has the table impressed from the get go. 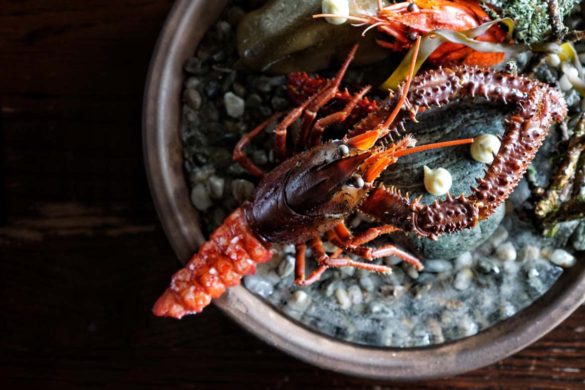 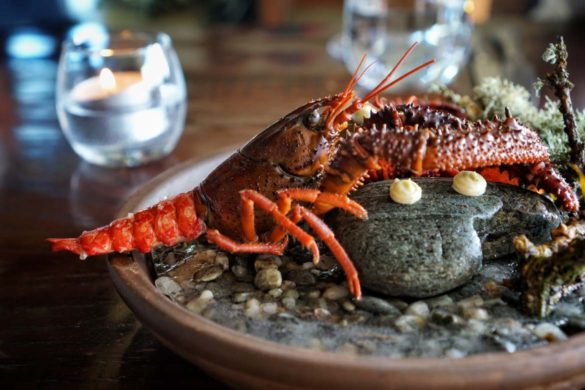 Mabee’s ‘Native Koura’ course is, simply put, one of the most impressively plated dishes we’ve encountered. Perched atop a frozen lake of sorts, this dish embodies the restaurant’s strong connection with (and love for) its local environment. Each plate brings a little slice of the surrounding Central Otago beauty to your table.

A nest of twigs arrives next, cradling a smoldering slice of Octopus that very much pleases the seafood eaters at our table, but its elegant simplicity is surpassed by an innovative honeycomb crisp soon after.  Made from the inner structure of local honeycomb kelp and drizzled with aged cheese, this is a clever, innovative and delicious bite unlike anything we’ve seen. 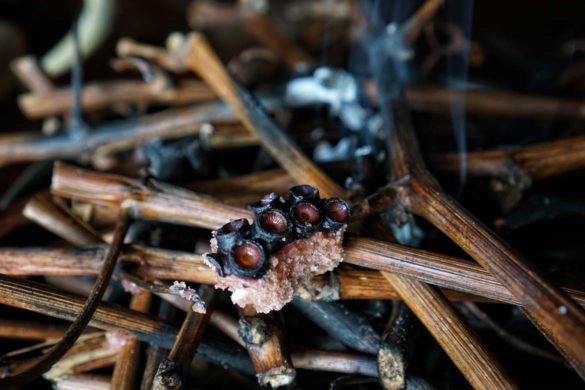 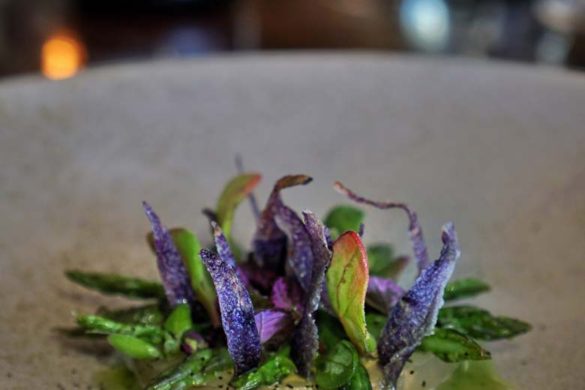 A beautifully constructed dish of morning asparagus, larch gel, remu cream, wild oregano flowers, pine and riwai potatoes has us singing its praises well after the meal was over, a symphony of incredibly nuanced flavors. ‘Peas from our Garden’ with Manuka honey, verbena and horopito hits the same highs, each component an amplified expression of the ingredient.

Amisfield’s paua pie course is a favorite of food writers up and down the land of the long white cloud. Our table tried both the original and the non-seafood version (pheasant, if you’re wondering, served with a rather confrontational claw placed atop – we have to say we like the somewhat macabre presentation) and happily devoured both. 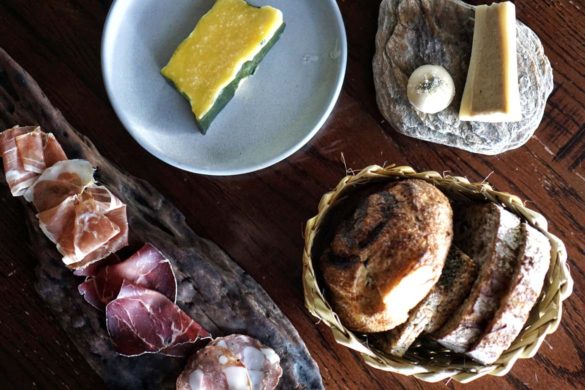 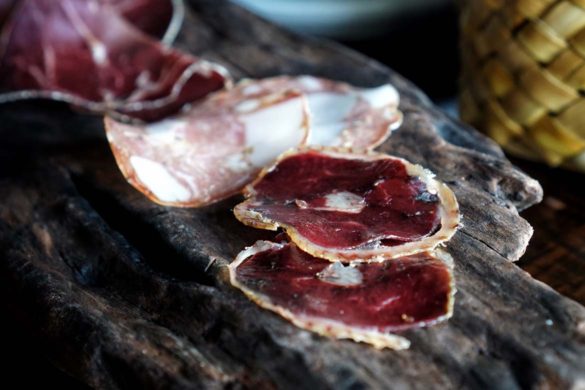 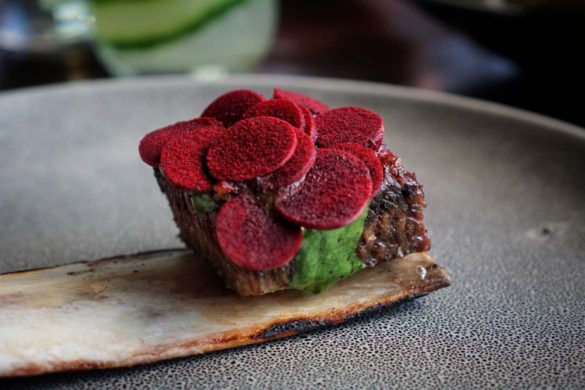 A charcuterie course (a definite trend globally – we also saw this at the fabulous Suhring in Bangkok) shows off Mabee’s love for preserving meats, something he’s learned a thing or two about during his time in Spain. The selection of meats, including a standout cured whole duck, are served alongside a cultured butter aged in kawa kawa leaves (a tad too medicinal in flavour for us), bone marrow spread and spectacular sourdough (word is the recipe hails from the land of sourdough itself, Copenhagen). It’s hard to resist devouring the generous basket of bread in it’s entirety, but there’s still so much more to come post the bread course that serious restraint needs to be exercised…it’s a nice pause in the journey, however.

In fact, pacing throughout the meal is spot on, and our service is second to none. It’s exactly what our table wants – friendly, funny, knowledgable. The only comparable service we’ve experienced would be Zack at Bangkok‘s Gaggan…absolutely top notch. 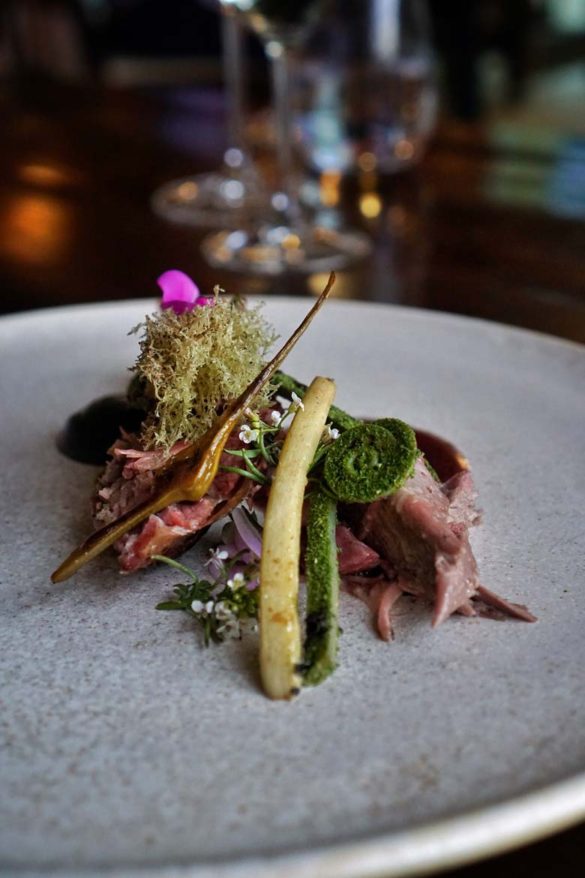 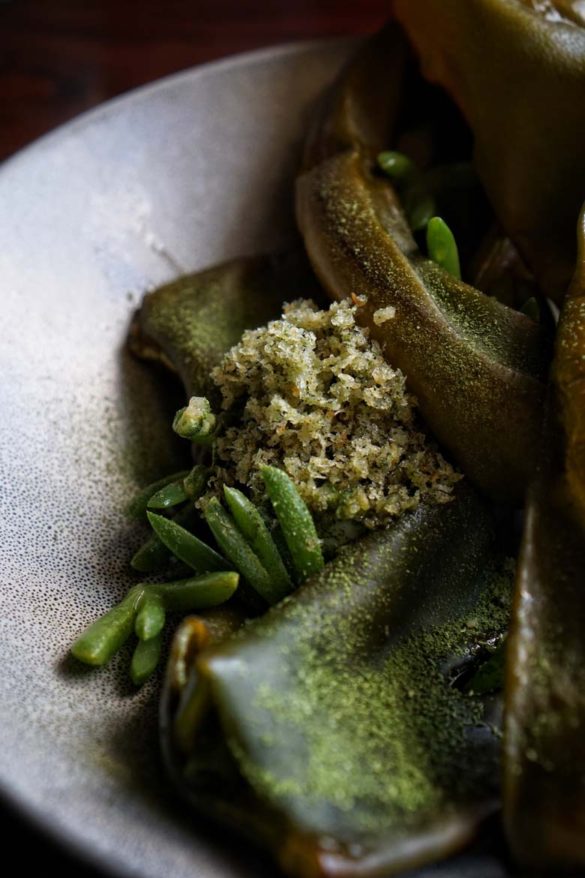 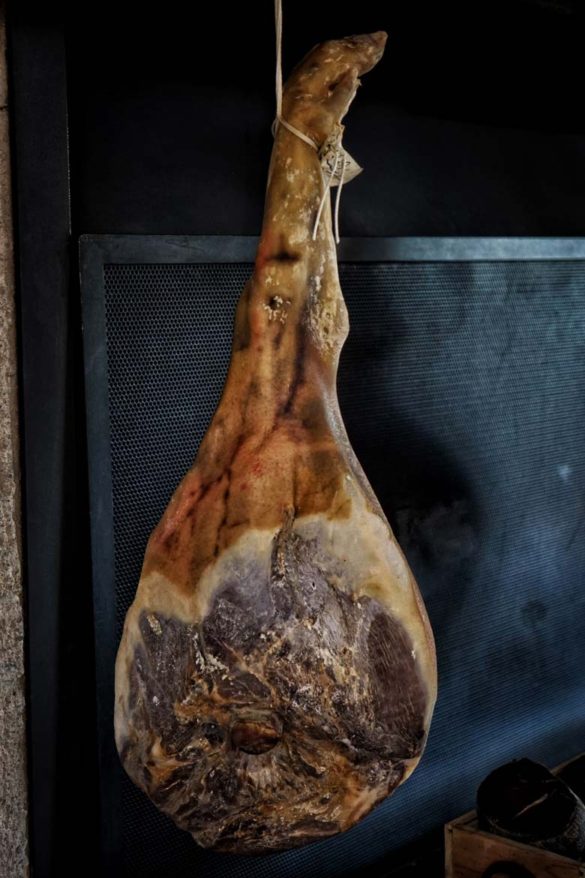 Our course of tender Cardrona lamb carved and plated table side shows off NZ’s iconic greenery with a picked piko piko fern   (a touch on the bitter side, but interesting nonetheless) alongside supplejack ‘pirita vine’ deer moss. More meat follows for the carnivore at the table, with succulent short rib served atop the bone under an armor of bright magenta carrot scales, while the seafood eater feasts on Bluff greenbone that’s been cooked inside bull kelp, finished with wild storm clam butter and textures of sea plants.

Desserts prove to be just as intriguing as the savoury dishes that have gone before, and we enjoy a tiny green ball of kawa kawa and silver birch sap served atop a slab of bark far more than we ever could have anticipated. The following lamb fat ice-cream sandwich topped with lamb bone charcoal and verbena granita that arrives nestled in a sheep hide proves to be one of the most sublime bites of the meal. If you haven’t tried desserts that utilize animal fats, you’re missing out – Maaemo‘s beef fat waffles are also sensational. The penultimate dish of our journey, a beautifully presented blown sugar tamarillo with accompanying tamarillo grappa doesn’t come close to hitting the high notes of the preceding courses – this one is a rare miss for us. ‘Harakeke fresh cheese’ ends the meal on a lovely note, however, and we’re simply buzzing with excitement over the meal we’ve just experienced. 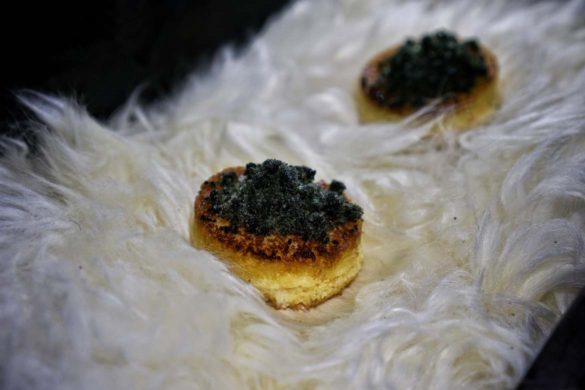 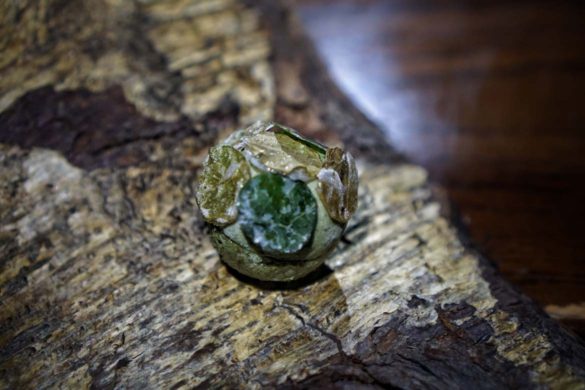 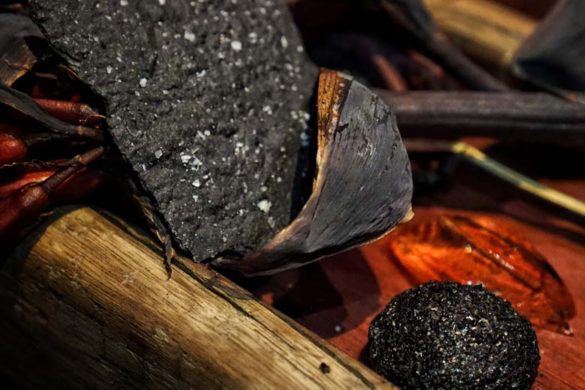 Chef Mabee and his Amisfield team are serving up world class cuisine that would be totally at home in the world’s finest two and three star dining rooms. I’d like to see the dining room at the property elevated to match the level of the cuisine, however – this is food that deserves a seriously sensational setting, and the current casual feel doesn’t quite deliver the goods.

Despite it being far away from my usual NZ base (Auckland), it’s a blessing that this food is being served up in Queenstown, an iconic location that draws travellers from all around the globe. I’m overjoyed that people from every corner of the world will be able to come here and truly experience a taste of New Zealand, perhaps taking a memory back with them to spread the word about just how good New Zealand cuisine can be.  It seems appropriate that an edible tour of uniquely kiwi ingredients is situated in a town that is the showcase for New Zealand’s unbridled beauty. It’s a simply sublime experience that shouldn’t be missed, whether you’ve travelled thousands of miles or perhaps just hopped on a domestic flight. Next time I land in NZ, this is where you’ll find me.

LifeTested: Is Apple’s iPhone X worth the upgrade?

Thiptara at The Palace: Traditional Thai with a...

Is Carnival by Tresind’s 5th Season its Best...